Davy Burke and Andriú MacLochlainn join Ger McNally, Pat Costello and Richard Commins to look back at a memorable week for Kildare GAA with a first Championship win under Glenn Ryan for the seniors and a first Leinster U20 title for the county since 2018.

Former Kildare hurler, and current joint manager of the county minor team, Mark Moloney joins the panel to discuss the season so far for Kildare hurling and to look ahead to this weekend’s Christy Ring Cup tie in Aughrim.

Roisin Byrne also joins the podcast to discuss everything from her recovery from a knee injury to her wedding plans, but also Kildare’s LGFA Leinster semi-final on Sunday against Offaly.

And finally, young jockey, and Clane GAA player, Iain Cribbin had a memorable time at Punchestown last week when he landed his first Festival winner on the Ted Walsh trained Jezarus. He relives the moment with Pat Costello. 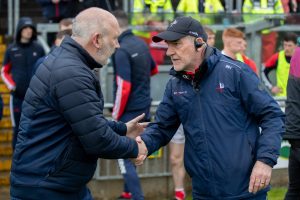