WOLFE Tones recorded a comprehensive victory over Coill Dubh in this week’s Senior C Cup Final in Hawkfield, which was postponed from last week. 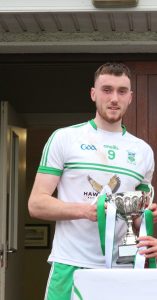 The amalgamation of Kill and Sallins are currently managed by 10 time Senior Hurling Championship medal winner with Coill Dubh, Chris Byrne. His side looked much lighter of foot and were it not for some wayward shooting in the first half, could have inflicted a greater margin of victory over their opponents. Coill Dubh for their part had to make some serious adjustments with three players leaving the field due to injury in the first half alone. A late rally for goals from the 21 yard frees were not enough break through the Wolfe Tones defence and obtain a goal which would have done little other than to put some respectability on the scoreboard.

Coill Dubh’s opening score came from a free from Chris Delaney which was responded to with an effort from play from Aaron Carney. After 6 minutes Leaving Certificate Student Cormac O’Connor departed the field of play through injury and was replaced by Aidan Gormley, prompting a re-jig of personnel in the Coill Dubh ranks. Coill Dubh kept the scoreboard ticking over with a fine effort from the side-line from Adrian O’Sullivan. After 17 minutes Finn Tierney was replaced with Ryan Whelan, forcing the Coill Dubh sideline to shuffle their pack once again.

No sooner was the adjustment made, then Wolfe Tones struck for their first goal of the game from Conor Egan which was followed up with scores from Aaron Carney and former underage Poc Fada champion Jack Couch. Adrian O’Sullivan again reduced the gap for Coill Dubh, just before Paul Kenna was replaced by Oisín Keane. Wolfe Tones led at the break by 1-09 to 3 points.

An historic victory for Wolfe Tones which was no doubt well celebrated.