One Change For Kildare Hurlers’ Visit To Garden County

KILDARE hurling manager, David Herity, has made just one change on his team for Round 4 of the Christy Ring Cup 2022 and the visit to Aughrim on Saturday to face Wicklow, throw in 1pm 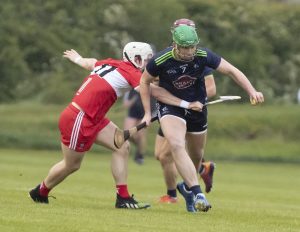 Clane’s Sean Christanseen, seen here in action against Derry, lines out at right half back on the team to face Wicklow in Aughrim Photo: Sean BrillyClane’s Sean Christanseen returns to the right half back position with exciting U20 player, Paul Dolan, stepping down to the bench, perhaps to get a well earned rest after an outstanding season to date for the U20’s and the seniors.

Christanseen is a very experienced player who won a Christy Ring Cup in 2018.

Kildare have won all three of their Christy Ring games up to now, eventually recording big victories after slow first halves in each game. Wicklow, on the other hand, have lost their three games to date to Derry, Mayo and Sligo so confidence will be low as they face Kildare, unlike previous meetings when Wicklow were always a threat to the Lilywhites.

With a tight defence, a solid midfield and a free scoring forward division Kildare should again come out on top and continue to confirm their favourites tag for the Christy Ring Cup 2022.