WHAT is it about the Camogie authorities at provincial and county level and their reluctance to provide us in  local media, newspapers and radio, with information on their matches and not just any ordinary matches, a Leinster Intermediate Championship semi final for instance? 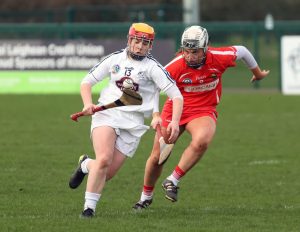 Deirbhile Byrne will be one of Kildare’s key players in the Leinster Intermediate Camogie Championship against Dublin on Saturday Photo: Sean Brilly

Anyhow we eventually found out that Kildare will play Dublin in the Leinster Intermediate Camogie Championship semi final on Saturday at 1pm in Abbotstown. We’ll be there and we will full have full coverage of the game in next Tuesday’s Kildare Nationalist.

In order to preview the game we spoke with Kildare manager, Joe Quaid, who was, as ever, cooperation personified, and knows what it’s about to promote the game of camogie and his players who take part in those games.

After the disappointment of losing the Relegation Play Off to Tipperary the Kildare manager gave the players some time off and allowed them to return to their clubs where they played three or four League matches.

“We train to play and the girls train to play and to be fair since we’ve come back their attitude has been impeccable, despite the fact that we were relegated.” Quaid also praised the players’ application at training and their commitment since their return.

The former Limerick hurler and Kildare hurling manager used the Littlewoods League as “a major learning block for all of us in relation to where we were and where we needed to be,” however, as he proclaimed from Day 1, the focus was on the Championship this year.

“We hadn’t really a huge amount of time with the full panel but we now have a few players back. Emma Kielty is back and Roisin Forde and those two alone have made a massive difference plus the Celbridge players, who were late back because of club commitments, have really helped the situation,” Joe Quaid explained.

Quaid is pleased with how the players have trained and how they have played in recent challenge matches. “I suppose the big test will be on Saturday to see if we can bring that to the championship table. I believe we can.”

“There’s a great bond and a spirit within the squad. We can’t ask any more off them. They have trained extremely hard, they’ve listened. The way we want to play it is eventually kicking in.”

“What I’d be saying to the players on Saturday is throw the shoulders back, believe in themselves and have a right cut off it . We won’t have any excuses whether it’s a good or a bad result we want the players to show their full potential. The players know we are heading in the right direction,” Joe Quaid concluded.

There is plenty of youth and experience in the Kildare side selected and if they can pick up from the way they finished against Tipperary then a Leinster Final appearance is a distinct possibility.