Eirgrid All Ireland U20 Semi – Final 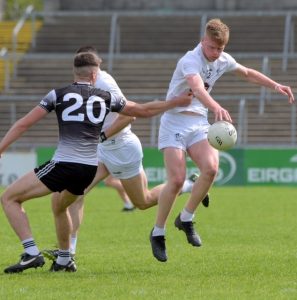 Shane Farrell drives past Feidhlim O’Donnell of Sligo in the Eirgrid All Ireland U20 Football semi final in Kingspan Breffni on Saturday Photo: Michael Anderson JuniorAlthough the outcome is a second All Ireland final in this grade in the five years of the competition, it was a game that won’t live long in Kildare memories, with the forward line struggling to find anything like their best form, shooting a woeful 12 scores from 32 attempts.

Captain Aaron Browne was the exception to that profligacy, the Celbridge man overcoming a quiet performance in the Leinster Final to shoot five fine points from play and claiming the official man-of-the-match award.

Sligo were no better than Kildare in front of the posts, the Yeats County men finding their opponent’s defence in their best form of the campaign to date. Time and again the ravenous Lilywhite defence, carved in the image of their management team of Flanagan, Bolton, Lacey and Scanlon, stripped Sligo of possession at the crucial moment, invariably, using the possession to set up an attack down the field.

That management team will wonder how they went in at half-time only five points clear (0-8 to 0-3), Kildare having turned over the Sligo kickout no fewer than nine times. But nine wides before half-time, not to mention five shots short into the goalkeeper provide an obvious explanation.

Both sides looked nervous early on, but Kildare had the clear edge in possession and scored the first four points with Daniel Lynam sending them on their way after six minutes. Overlapping wing-back Tommy Gill doubled the lead with Adam Fanning and Browne adding further scores before Oisín Flynn finally opened Sligo’s account after seventeen minutes.

A fine free from Lee Duignan from 45 metres made it 4-2 but after Browne and Joseph Keaney swapped points, Kildare put their profligacy behind them with the last three points of the half through Browne (2) and Niall O’Regan to go in five ahead.

Sligo sorted out their kickout problems at half-time and a third-quarter rally gave their supporters real belief. They scored four of the first five points of the half through Gavin Duffy, Keaney, Canice Mulligan and Eoghan Smith. O’Regan’s superb run from defence and cool finish was Kildare’s only response in the opening 22 minutes of the half and nerves were rattling heading down the home straight.

Crucially, Kildare got the next score to push four ahead. Goalkeeper Cormac Barker made a foray upfield and offloaded to James Dalton 45 metres from the Sligo posts and Gill stroked over the free cool-as-you-like to make it 0-11 to 0-7.

That was the cue for Sligo to launch an aerial bombardment of Barker’s goal, hoping lightening might strike twice after their late heroics against Mayo. But Barker and his superb defence held firm and it was full-back Dean O’Donoghue who lifted the siege with an inspirational run and point to finish off the scoring.

Not a classic by any means and Kerry and Tyrone won’t have been shaking in their boots at the prospects of next weekend’s final. Kildare, though, are developing a nice habit of winning games when not always at their best. One more to go.