Eirgrid All Ireland U20 Football Final

IT may not be quite the “Newbridge or Nowhere” scenario of a few years ago but there is certainly unhappiness within the Kildare camp at reports that the Eirgrid All Ireland U20 Football Final is to be fixed for Kingspan Breffni at 5.30pm on Saturday evening next. 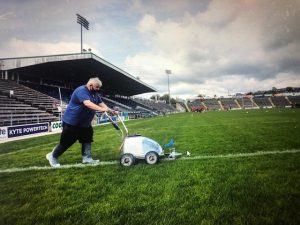 Marking Kingspan Breffni before the Eirgrid All Ireland U20 semi final on Saturday Photo: INPHO/John McVitty

It was expected that the U20 Football Final would instead be fixed for Croke Park next Saturday as three of the four previous finals were played there, including the 2018 Final, which was won by Kildare. However following the victory of Tyrone over Kerry on Sunday afternoon news filtered out that the Final would in fact be fixed for Kingspan Breffni on Saturday evening.

The Cavan venue was the location for Kildare’s victory over Sligo in the All Ireland semi final last Saturday evening.

Speaking after that game Kildare manager, Brian Flanagan, expressed his clear preference that the Final be played in Croke Park. “It’s a National Final, it’s an important game. U20 is the next step to senior so really that game should be in Croke Park,” Flanagan told local media after the game.

It is known that Kildare were less than happy with the surface in Kingspan Breffni on Saturday evening and when news emerged that the Final was to be fixed for the Cavan venue it is understood that there were representations from Kildare to Croke Park.

Further communication between Kildare and Croke Park is expected on Monday morning and while we are a long way off the “Newbridge or Nowhere” scenario there is still a determination in Lilywhite land that the U20 Final, a National Final, be played in Croke Park on Saturday.

It is understood that a final decision will be made on the venue for the U20 Football Final by afternoon on Monday.