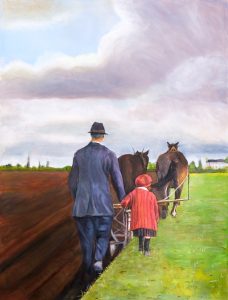 A small farm near Newbridge was advertised for sale in 1922 – inspired by a newspaper cutting, SULT artist Mary McGrath painted this as an example of ‘Life Goes On’.

A collaborative multimedia art exhibition will open next Monday in Newbridge to mark the centenary of the withdrawal of the British army from Kildare.

The exhibition is a collaboration between SULT (a group of multidisciplinary Kildare-based artists who came together in a collective manner during the pandemic to promote and market their work online) and Newbridge Local History Group.

‘Life Goes On’ opens on Monday 16 May, exactly one hundred years after the withdrawal of British troops. At 10.30am on 16 May 1922, the British army withdrew their forces simultaneously from the barracks in Naas, Newbridge, Kildare and the Curragh, watched by locals as the constant stream of lorries and troops passed through the Kildare towns on their way to Dublin Port. Almost at the same time, the fledgling Free State army marched into the Curragh and Newbridge to take possession from the departing troops. A month later, the Irish Civil War began.

When shoe lasts and financial records belonging to Newbridge cobblers the Sheehan brothers were discovered by Irish ceramicist Eleanor Swan (a member of SULT), the seeds of an idea for an exciting new collaboration were planted. The lasts had been used to make shoes and boots for British troops stationed in Kildare up until their withdrawal, and Eleanor repurposed them to make slip cast moulds for a new sculpture.

SULT approached Newbridge Local History Group and invited them to collaborate in marking this significant political and social change in Kildare in 1922. The aim of the collaboration was to produce a visual response to local stories or an historical, political or social event of the time.

Lectures on that important time in the State’s history will be given to visiting groups on request. Most significantly, the exhibition will be held in what was a former Army barracks located in the Bord na Móna headquarters in Newbridge, open to the public for the first time.

‘Life Goes On’ opens on Monday 16 May and will run until 27 May. See sultartists.com for further information.