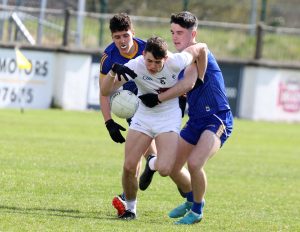 James Harris, Castlemitchell, seen here in action against Longford in Round 2, will again captain Kildare minors in the Leinster semi final against Wicklow on Wednesday night       Photo: Sean BrillyNot unexpectedly the Naas man has returned to the players who played in the opening two rounds against Offaly and Longford with only five of those who played last time out against Meath retaining their places. James Harris, the captain, Eoin Lawlor, Joey Cunningham, Joe Hanamy and Eoin Cully, will start again on Wednesday night.

There are quite a number of positional switches from, say, the Longford game, among them, Ben Ryan moving to full back, Joey Cunningham moving to right half back, and Cormac O’Sullivan partnering Cian O’Reilly at midfield.

Kildare defeated Offaly, Longford and Meath in the Group stages but haven’t played competitively for four weeks while opponents, Wicklow, who came through the Quarter Final route, played Longford and Westmeath in the last two weeks.

Niall Cronin and his Management Team have the Kildare team playing a nice brand of football where they can play with flair or grind out a result as required and, although it won’t be easy, they should carry enough to see them through to the Leinster Final.