THE month of May denotes the start of the classics season and The Curragh Racecourse, home of all five Irish classics, has been gearing up for an exciting summer of world class racing and a social occasion like no other. 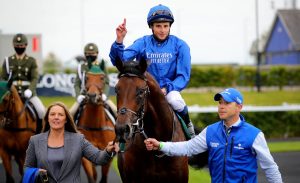 For the horse racing fans the start of the exciting Classic season sees some of the best horses in Europe come to Ireland and battle it out on the hallowed turf of racing’s HQ. The 2022 Tattersalls Irish Guineas Festival will see an increase in prizemoney with both Guineas Classics increased from €400,000 to €500,000 and the Tattersalls Gold Cup rising to €400,000 from €300,000. Tattersalls have been associated with the Curragh since they first sponsored the Gold Cup in 1985. They added the Irish 2000 Guineas in 2013 and the Irish 1000 Guineas in 2015 to their sponsorship portfolio.

For the Tattersalls Irish 2000 Guineas NATIVE TRAIL is an obvious name and has already showed his class at the Curragh when winning in the Goffs Vincent O’Brien National Stakes last year. Entries currently show that he will line up against recent Coolmore Arizona Tetrarch Stakes winner winner in BUCKAROO from Joseph O’Brien’s stable while ANGEL BLEU could make the trip over to represent Ralph Beckett. The Tattersalls Irish Gold Cup looks a robust field with last year’s winner HELVIC DREAM still in the running alongside winner of the both the Cox Plate, and more recently the Gr1 Prix Ganay, STATE OF REST. A strong charge from the UK in ALENQUER for William Haggas, TEONA for Roger Varian and LORD NORTH for John and Thady Gosden. The Father and son team also hold a Tattersalls Irish 1000 Guineas  entry with INSPIRAL. The unbeaten three-year-old was ruled out of the Qipco 1000 Guineas but is a likely starter in the Irish equivalent.

Two of this year’s five classics will be contested at the Curragh’s three-day Tattersalls Irish Guineas Festival from Friday, 20 May to Sunday, 22 May. The festival will have live coverage from RTE, RACING TV and ITV, attracting a significant global audience.

Brian Kavanagh, CEO of The Curragh, said “With three race meetings under our belt, we are really looking forward to getting the Classic season underway and the Tattersalls Irish Guineas Festival is one of the best weekends of racing in the European racing calendar. The end of the Punchestown Festival signals the beginning of the flat season in earnest and as we have seen from race meetings around the country, there is great demand when the opportunity arises to get out and socialise alongside high-quality racing. We plan to really celebrate the Classic season in 2022 as we welcome visitors to our Guineas meeting for the first time since 2019.”

William Hill joins the festival as betting partner for the first time sponsoring ten races across the weekend. This will include one of Ireland’s most valuable handicaps in the ´€150,000 William Hill Emerald Mile featuring on day one of the festival. Adrian McGuinness looks to have a strong team and holds 7 of the 44 entries.

The Curragh has partnered up with Manguard Plus to introduce a free shuttle bus service to and from Newbridge and Kildare for all fixtures in 2022. The buses will commence with the arrival before the first race and finish an hour after the last meeting, or two hours for the larger festivals. Further details can be found on curragh.ie.