A slick Kildare outfit qualified for their seventh Leinster minor final in ten years with a facile victory over Wicklow in Newbridge last night. 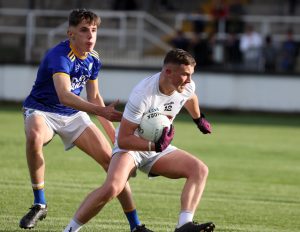 Wicklow, playing into a slight breeze, did get off the mark after 21 minutes through Alex Kavanagh’s free but Ben Loakman’s goal from close range after a move involving Tom Kelly and Eoin Cully four minutes before the break put paid to any comeback.

The home side led by 1-11 to 0-2 at half-time but Wicklow were more competitive after the interval. Kavanagh was their most dangerous forward and finished with six of their ten points while they also had fine scores from James Boland and Paidí Kavanagh late on to take some of the bare look off the scoreboard.

For Kildare, centre-back James Harris and classy midfielder Ryan Sinkey anchored the side but the star turn was Killian Browne. The brother of under-20 captain Aaron, Browne was on hand to finish emphatically from a Cillian Geraghty pass for the second goal six minutes from time. That capped an impressive 1-6 return for the Celbridge man.

Kildare will now meet Dublin in the final, the two counties having already contested the provincial under-20 final with the Lilywhites coming out on top in that one.