EirGrid All Ireland U20 Football Final

KILDARE Manager, Brian Flanagan, has named the same team as that which started against Sligo in Kingspan Breffni on Saturday last, for this Saturday’s EirGrid All Ireland U20 Final against Ulster champions, Tyrone in Pairc Sean Mac Diarmada, Carrick on Shannon, throw in 5pm.

The match will be broadcast live on TG4 and on KFM Radio with Ger McNally and Philly Wolfe. 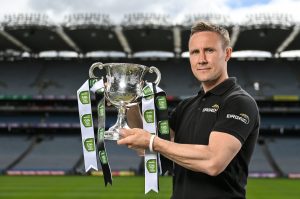 Brian Flanagan, Kildare U20 Football Manager, pictured ahead of the
EirGrid GAA Football U20 All-Ireland Final this Saturday. EirGrid, Ireland’s grid operator has partnered with the GAA since 2015 as sponsor of the U20 GAA Football All-Ireland Championship. Photo: Sportsfile

The impressive Niall O’Regan, who started the semi  final instead of the absent Aedan Boyle, retains his place at right half forward in the team that will again be captained by his Celbridge clubmate, Aaron Browne.

Speaking at a media event to promote Saturday’s Final, ironically in Croke Park on Thursday, impressive Kildare Manager, Brian Flanagan said that, apart from long term injury victim, Oisin O’Sullivan, his side were lucky on the injury front this year and that because of the good relationship with Senior Manager, Glenn Ryan, no U20 players have been lost to that set up either. Commenting on the U20 V senior rule Flanagan said that his preference was that U20’s remain with the U20’s.

On the decision to play the game in Carrick on Shannon instead of Kildare’s preference of Croke Park, the Johnstownbridge man said, “it was something (play in Croke Park) that our players asked us to do and we did so for 24/48 hours but once the decision came out that it was Carrick on Shannon we just accepted it and moved on. So the venue was parked on Monday afternoon and our fellas are just looking forward to playing the game now on Saturday.”

Flanagan also had wise words on the rush to push young players into senior set ups. “Senior intercounty football, from a conditioning and fitness point of view, has gone to a different level now and even for talented footballers of 19/20 years of age there is still a two year gap to get to the level of a fully fledged senior intercounty footballers. That’s the problem with getting a 19 year old into the senior set up and then straight into the starting 15 or having an impact in League or Championship. We have been patient in Kildare and we have allowed these fellas to build from a conditioning and an athletic point of view. The football is there but there is a lot more to it than that.”

Speaking on the ambitions of his squad, the Manager had this to say, “The players were clear before this Championship as to what they wanted to achieve. They had won a provincial title at minor level and they obviously wanted to back that up but the ultimate was the All Ireland success and they have the attitude on Saturday to go and do that. Nothing is guaranteed but at least they are in the position that they have set out for themselves six months ago. We just want to try and see that out this weekend.”

Brian Flanagan also had praise for his Dad, Timmy and Mam, Kathleen “They have always been supportive of me in terms of going to matches and since I went into coaching and management they have been at all the games that they can and they get a real kick out of it. They are both Galway natives but they are adopted Kildare fans now.”

Brian’s Dad, Timmy, in fact, played for Confey in the early days of that club and the young Brian started there before moving on to Johnstownbridge. Saturday is an honour for the family and the club.

2022 marks the eighth year that EirGrid, the state-owned company charged with delivering a cleaner energy future through management of Ireland’s electricity grid, has sponsored the EirGrid GAA Football U20 All-Ireland Championship.

Michael Mahon, Chief Infrastructure Officer at EirGrid, said, “On behalf of all at EirGrid, I would like to wish the very best of luck to Kildare and Tyrone in Saturday’s EirGrid GAA Football U20 All-Ireland Final. It has been an exciting championship for these exceptional young men, their managers, backroom teams and indeed their families and supporters who have supported them this year and throughout their sporting careers.”

“On behalf of EirGrid I’d like to wish both sides the very best of luck and congratulate them on their Provincial titles and the achievement of making a prestigious All Ireland Final.”