WITH one eye on the Christy Ring Cup Final next week and another on keeping the momentum of a winning streak going Kildare Hurling Manager, David Herity, has named an experimental yet strong team to face Sligo in the fifth and final Round of the Christy Ring Cup in St Conleth’s Park on Saturday, throw in 12 noon. 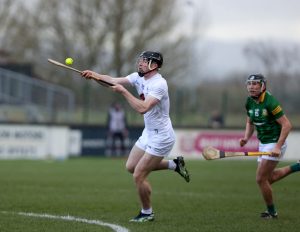 Tom Finnerty, Celbridge, slots in at full back while there is an all new half back partnership of Jack Travers, Leixlip, and the Naas pair of Ross Kelly and Kevin Whelan. U20 players, Conan Boran, Naas and Paul Dolan, Éire Óg Corra Choill form a new but exciting midfield partnership.

Pat Leahy of Celbridge is sited at right corner forward.

All of the players have gained experience in the Keogh Cup or the Allianz League and most have featured in earlier rounds of the Christy Ring Cup so experience at this level will not be found wanting.

Just as Herity would want it there are many of the “newcomers” who will start on Saturday who will be putting their hands up for inclusion in the Christy Ring Cup Final a week hence so the intensity of battle that the Manager desires will not be lost on these players.

A number of fringe players have also been included on the subs bench.

Kildare sit on top of the Christy Ring Cup table with full points after four games while Sligo, who many thought might be a contender for the Final, are second from bottom with just two points.