KILDARE Manager, Sean Finnegan has retained the team that defeated Offaly in the semi final in Hawkfield on Saturday last for this Saturday’s TG4 Leinster LGFA Intermediate Championship Final against Wexford in Netwatch Cullen Park, Carlow, Throw in 4pm. 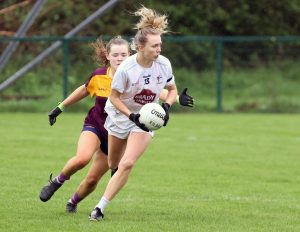 Wexford qualified for the Final, their third Final in the last year, by virtue of an extra time victory over Laois on Sunday last. The side lost last year’s All Ireland to a Sean Finnegan managed Westmeath side last autumn and followed that up a couple of week’s ago by losing to Roscommon, Kildare’s conquerors, in the Lidl LGFA Division 3 League Final.

Kildare will once again be captained by midfielder, Grace Clifford, and will contain that potent full forward line of Neasa Dooley, Orlaith Sullivan and Lara Curran.

Corner forward Neasa Dooley is on a rich vein of scoring form at the moment but the Maganey native, who now plays for Athy, is quick to deflect attention from herself and instead heaps praise on those further out the field for the supply of ball inside. “It’s the girls out field that are doing all the hard work, the players at the back and the midfield getting the ball into us. Without them the goals can’t happen really, ”

Neasa is the youngest of five in the Dooley household headed by Dad, David and Mam, Dympna and includes bothers Niall, David and Ronan as well as sister, Ciara. “We all played football from an early age, I was five, but my sister was more into the Irish dancing. Ciara still has more medals for dancing than I have for football,” she laughs.  “While it was predominantly gaelic games I played a lot of basketball and I liked soccer but I never played it,”

Although now a prolific goal-scoring forward Neasa Dooley actually played midfield for the boys U12 team. She started playing on Kildare LGFA teams from the age of 10 and she was called into the senior squad at the age of 17 in 2017. After a very successful minor year in Leinster and the All Ireland in 2018 she was called into the senior squad proper in 2019 by then Manager, Daniel Moynihan, and the rest, as they say is history. Neasa was selected on the Lidl League team this year along with her captain, Grace Clifford and full back, Laoise Lenehan.

“I found the senior game a lot more physical and more intense but the players were so welcoming,” Neasa recalls of her first year with the county. “We have a lot of new players in this year and it was tough at the start for us to gel together but its now a big family at this stage and that’s paying off in the last few game.”

With a Management Team led by Sean Finnegan and including former All Star and four time All Ireland winner with Mayo, Diane O’Hora, Neasa Dooley is extremely happy with the current Kildare set up. “They are all fantastic ever since Day 1, pushing us us bigtime and trying to get the best out of us. We know Diane from her experience from being with Mayo. She might nail us in training when we make a mistake but that’s fantastic to have.”

Mayo and Collingwood AFL footballer, Sarah Rowe, would feature highly in Neasa Dooley’s thoughts. “I am a big follower of hers, I was always a Sarah Rowe fan and Cora Staunton too. I would have had ambitions to play in AFL ever since I realised that Sarah followed that route and is now living the dream over there so maybe that’s something that I might pursue in the coming years, it’s still in the mind,” she explains.

Third year Sport Rehabilitation and Athletic Therapy Student in IT Carlow, Neasa Dooley has one more year left to complete in her studies and her ambition would be to be pitchside acting as athletic therapist for teams and possibly working in a clinic for sports injuries.” On the pitch, not surprisingly, Leinster and All Ireland medals would be top of the agenda.

While the Maganey native is enjoying her football at the moment she is very conscious of the commitment involved in the game. “Leaving the house in the evening and driving up to Newbridge that’s a bit of an escape from life in general really for me, an escape from college and exams but it’s the friendships that you get out of it too. There is a lot of commitment to it like the travel to training, long bus journeys to matches. You do your own sessions outside of the team sessi0ns and maybe have to take time off work here and there at weekends. You won’t do that if you don’t enjoy it though,” she explains.

“You spend most of your life on a football pitch so there would have to be understrand9mg there if you were in a relationship. It would be the same with friendships. You miss out on social life in college. You’re watching others go out but you can’t because you have a big game at weekend so the whole social aspect is sacrificed as well but it’s worth it in the end,” Neasa says.

Looking forward to Sunday’s final, Neasa Dooley expects a big challenge from Wexford. “They are a difficult team. They are different team in Championship to the League. They have put it up to us and they will do the same on Sunday especially after the way they played against Laois. This is their  third final now so they won’t want to lose a third one.”

“We have the preparation done for the game, though,” Neasa Dooley concludes.