KILDARE’S Eric “Lilywhite Lightening” returns to the ring in Belfast on Saturday night when he headlines the Mark Dunlop promoted  Redemption event in the Europa Hotel where he will take on Engel “El Cohete” Gomez a 22 year old from Nicaragua. 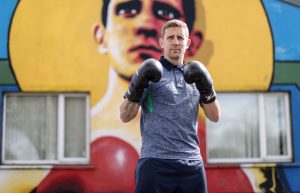 Athy’s Eric Donovan, tops the Redemption Event in the Europa Hotel in Belfast on Saturday night Photo: INPHO/Dan SheridanThe Athy man returns to the ring in a bid to kickstart another tilt at a European title after suffering a third round TKO against former Cuban Olympic Champion, Robeisy Ramirez, in Glasgow in February, a loss which disappointed Donovan greatly.

Following that fight in Glasgow, in which he prepared exceptionally well, Eric Donovan started to give indications that 2022 may be his final year as a professional boxer however he showed his determination to go to the well one more time in his quest to achieve his ultimate dream of winning a European title.

The Athy man had a great chance to do just that a year ago to the day on Saturday when he was due to fight Italian Mario Alfano for a European super featherweight title in Brescia but an unfortunate rib injury just week’s out from the bout denied him the opportunity.

Many a boxer would have wilted at this setback but 36 year old Donovan, who has carved out a great name for himself as a motivational speaker, used those skills to get himself back into the ring against Ramirez in February and again in Belfast on Saturday night.

A very popular figure, inside and outside the ring, Eric Donovan will again give his many fans, not only in Kildare but throughout Ireland, value for money again in Belfast as he, perhaps, winds down his professional career, but at the same time cranks it up for another tilt at his dream of dreams, a European title.

Eric and his wife, Laura, recently announced the good news that they are expecting a third baby later this year. Perhaps there could be a double celebration.