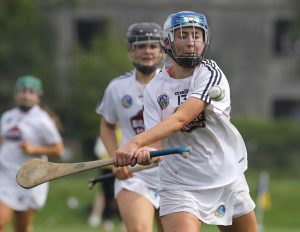 Kildare captain, Ellen Morgan, returns from injury to line out at midfield in the Leinster Intermediate camogie final against Meath in Aughrim Photo: INPHO/Lorraine O’Sullivan

Talented dual player, Forde, has been included on the subs bench by Kildare LGFA Manager, Sean Finnegan for his side’s TG4 Leinster Final clash with Wexford in Netwatch Cullen Park, also on Sunday with a 4pm throw-in. Had she been available it is very likely that Forde would have started at midfield on Sunday for Quaid’s side against Meath. She has been listed among the subs for that game also.

It is an unfortunate situation that both Managers have been put in and it is a terrible situation that the Maynooth player now finds herself in. She can’t be involved in both matches but surely a bit of planning by the authorities might have prevented the situation that forces Roisin Forde into sacrificing one team over the other. Kildare’s camogie matches have all been played on Saturdays, up to Sunday’s Final.

Joe Quaid is fortunate that he can call on the services of his captain, Ellen Morgan, Johnstownbridge, for Sunday’s final as she has recovered from injury so she will slot into a midfield role. In another change from the side that defeated Dublin in last Saturday’s semi-final, Sara Carroll of Celbridge starts at full forward for Sunday’s Final against Meath.

While Meath were victorious when the sides met in the League in the Spring, Kildare have been showing definite signs of development over the last few games and there is a confidence within the group and the Management Team that there is an opportunity on Sunday to beat Meath, although the Royals have been in the ascendency in recent years.