EIRGRID ALL IRELAND U20 FOOTBALL FINAL

THE latest Canavan to roll off the Errigal Ciarán production line proved too hot for Kildare under-20’s to handle as Tyrone captured their first title since the introduction of the grade in 2018. 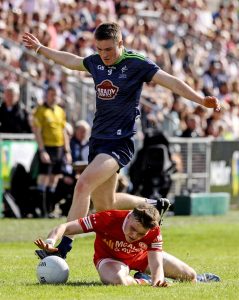 Kildare’s outstanding midfielder, Luke Killian is action against Tyrone in the Eirgrid All Ireland U20 Football Final on Saturday Photo: INPHO/Lorraine O’Sullivan

There was no shame in defeat for a relatively young Lilywhite outfit, many of whom will be eligible for a second tilt at the competition next year. It was the fourth defeat in six finals for Kildare at the under-20/21 grade since the competition started in 1964.

They came up against an exceptional Tyrone outfit for whom Ruarí Canavan, son of Peter, earned the headlines and the official man-of-the-match award with a personal tally of 1-7, for a side which produced a near-perfect execution of the Red Hands style of football. Not a bad return considering his marker Harry O’Neill kept him relatively quiet for most of the first half.

Whether the heavy schedule of five games in 30 days ultimately told on Kildare, particularly in the warm sunny conditions in Páirc Seán Mac Diarmada, it is hard to say but after falling adrift in the second quarter, Brian Flanagan’s side found the going physically tough in the second half and in truth they never replicated their best form and can have no complaints with the outcome.

The game got off to an astonishing start with Canavan goaling within 21 seconds only for Kildare to repeat the act within a minute, Daniel Lynam palming home from Eoin Bagnall’s pass after good work from Shane Farrell on the left. A case of take your goals and the points will come it seemed.

Kildare won plenty of possession in the opening quarter with their midfield having plenty of joy from the Tyrone kick-out but the Red Hands were more clinical with their possession. Points from Ciaran Bogue and Dan Muldoon saw the Ulster champions go 1-2 to 1-0 clear before Niall O’Regan and Ciaran Daly exchanged points.

The Lilywhites hit a purple patch between the 12th and 17th minutes and points from the busy O’Regan and Dean O’Donoghue brought them level before Eoin Bagnall kicked a superb 46 metre free to send them into a 1-4 to 1-3 lead.

Tyrone, though, went into overdrive with five scores in a six-minute spell and although Bagnall’s free ended twelve minutes without a score, impressive wing back Niall Devlin rounded off the half with another point to leave the Lilywhites trailing at half-time by four points (1-9 to 1-5).

Flanagan admitted afterwards that his side really needed a strong start to the second period but it didn’t happen, a couple of wides knocking their confidence perhaps and instead it was Canavan who pounced to stretch their lead.

A low-scoring third quarter saw Bagnall and Tommy Gill register for Kildare and superb Tyrone wing-back Niall Devlin add another for Tyrone but as the game wore on the Lilywhites wilted somewhat, and as they chased the opening that might lead to a goal, they ran into a well-marshalled red wall on too many occasions.

That played into Tyrone hands, allowing them to hit Kildare on the counter-attack and with Canavan moving into exhibition mode they hit nine points in the final fifteen minutes, including injury time, to run out clear-cut six-point winners, Canavan contributing five of those white flags.

Kildare persisted with long balls into a somewhat isolated and well-marked Aaron Browne, the captain and Celbridge clubman doing well to gather possession but finding it difficult to connect with colleagues or take his own score. He finished the day scoreless and was called ashore after 42 minutes.

Sallins midfielder Luke Killian, arguably Kildare’s best performer on the day, drove his side on to the end, scoring three late points, with Eoin Bagnall adding two more frees and Darragh Swords and Adam Fanning getting on the scoresheet themselves but the result had an air of inevitability about it for much of the second half with Tyrone deservedly lifting the Tim Clarke Cup.