KILDARE senior footballers made it a full set of Leinster Finals between themselves and Dublin this year despite a curate’s egg of a performance against Westmeath in Croke Park this afternoon. Having beaten the Dubs in the under-20 provincial decider the Lilies now face the Metropolitans in the minor decider on Wednesday and the senior final on 28 May. 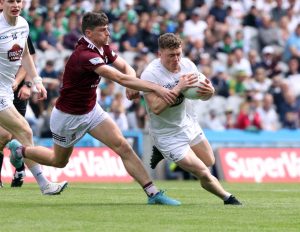 It was the strangest of games, played out in front of a sparsely populated ground, and lacking the intensity you would expect of a provincial semi-final.

In a carbon copy of Tyrone’s against Kildare’s under-20’s the night before, straight from the throw-in Westmeath sauntered through for a goal, timed at 8 seconds, eleven quicker than young Canavan’s in Carrick-on-Shannon.

Centre-back Ronan Wallace offloaded to Westmeath’s best player, Ronan O’Toole, who surely couldn’t believe the space he had as he buried the chance to the net. The mystery as the game went on was who was supposed to be marking him with Kildare looking very open down the middle and wings.

Kildare recovered well from the early shock and, when Daniel Flynn set up Jimmy Hyland for a palmed goal on eight minutes, they hit the front for the first time (1-3 to 1-1).

By the 19th minute all six of Kildare’s forwards had scored from play as they moved 1-9 to 1-3 ahead having seen Darragh Kirwan and Alex Beirne also spurn goal chances.

Then, the looseness at the back allowed Westmeath back into it. Kildare struggled all day to track runners and when wing-back Jamie Gonoud raced through in acres of room two minutes before half-time his pass to Wallace spilled through the centre-back’s hands but succeeded in deceiving the outrushing Mark Donnellan, allowing Gonoud to finish to the empty net.

That brought Westmeath within two points (2-6 to 1-11) but Kevin Flynn and the in-form Ben McCormack (his fourth of the half) registered points to stretch the gap to four by half-time.

Westmeath never seemed to have the conviction that they could bridge the gap in the second half. Kildare outscored them six points to three to stretch the lead to seven points (1-19 to 2-9) by the 48th minute with Kirwan particularly prominent.

O’Toole narrowed the gap to six on 52 minutes and with five minutes left Sam McCartan shot just over the crossbar. O’Toole followed that with a point to narrow the gap to four.

A blistering Daniel Flynn run threatened one of his wonder goals, but he was fouled just outside the box allowing Neil Flynn to point the free. That seemed like an assurance point but in injury time Heslin scored a fine point from the Hogan Stand side into the Canal End and when McCartan pointed another from a similar position, Kildare were suddenly only a goal away from being forced into extra-time.

They could have done without a scare caused by Ryan fumbling a short Donnellan kick-out, with two Westmeath men bearing down on him and no colleagues within sight. Thankfully, referee Seán Hurson called a foul and Kildare could breathe again.