THERE were mixed fortunes for Kildare’s LGFA and Camogie teams as the ladies football team captured the Leinster IFC with a 3-7 to 1-7 victory over Wexford in the final in Netwatch Cullen Park this afternoon but two hours earlier there was heartbreak for the camogie team as they lost by two points to Meath, 2-9 to 1-14 in Aughrim. 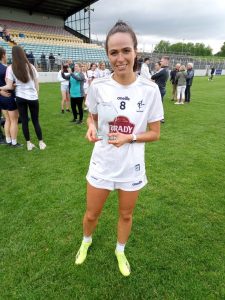 The Kildare LGFA team got the perfect start when they awarded a penalty on 11 minutes which was expertly dispatched by Neasa Dooley to give the Lilywhites a 1-1 to 0-1 lead early lead. Kildare got their second goal on 23 minutes when captain and Player of the Match, Grace Clifford finished to the net.

Kildare led 2-3 to 0-4 at the break with Tara Doyle and Ciara Banville prominent for the Slaneysiders in the first half.

Half way through the second half and Wexford were right back in the game when the dangerous Doyle raised a green flag and Kildare’s four point lead was suddenly back to one.

A Lara Curran free and a Neasa Dooley point from play settled Kildare nerves again early in the final quarter and the game was put firmly to bed with a Lara Curran goal inside the last four minutes to give Kildare a six point cushion which they were able to protect to the end and claim a Leinster title.

Earlier in the afternoon the Kildare Intermediate Camogie team got off to the perfect start in their Leinster Final against Meath with a goal from Sara Carroll in the sixth minute. Meath took the lead in the 13th minute and they led 1-3 to Kildare’s 1-2. Kildare responded almost immediately with a goal from Deirbhile Byrne and they led 2-4 to 1-7 at the break.

It was nip and tuck in that second half but Kildare were holding their own and the sides were level with six minutes remaining, Kildare 2-8, Meath 1-11. Meath regained the lead on 27 minutes and held a two point lead as full time approached. Kildare pulled one back at the start of injury time but a score to draw level or win the game never arrived and Meath ran out winners by two points, 1-14 to Kildare’s 2-9.

This was a powerful performance by Kildare considering the fact that the Royals were comfortable winners when the sides met in the League earlier in the year and while there will be disappointment with the result today there will be satisfaction that the development graph continues to rise which augurs well for the All Ireland series which starts shortly.