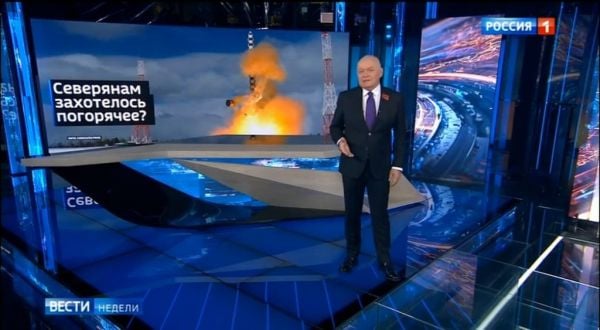 The Russian TV presenter who showed a simulation of a nuclear attack on Ireland and Britain has responded to the Taoiseach’s comments on an apology.

The simulation was initially shown in response to the UK’s support for Ukraine.

Kiselyov is a close associate of Russian president Vladimir Putin and is perceived as a propagandist for the Kremlin.

Russia-1, the channel where his programme airs, is the most widely watched television channel in Russia.

He has now directly addressed anger in Ireland over the programme.

Two weeks after Russian state TV’s Dmitry Kiselyov threatened to “sink the British Isles” with nukes, he’s responded to the uproar it caused in Ireland

Kiselyov said: “In Ireland a strong reaction was provoked by remarks made in our programme two weeks ago in response to British PM Boris Johnson’s threat to strike Russia without consultations with Nato.

“Let us remind you, it was a threat made to us from London. Back then, Boris Johnson made a provocative and absolutely groundless hypothesis, saying that Russia could allegedly use a tactical nuclear weapon in Ukraine. And after that, in response, and without consulting Nato, Britian would strike Russia.

“It’s clear that Boris Johnson, having simulated a Russian nuclear attack, was also threatening us specifically with a nuclear strike in revenge.

“We had to say then that the whole British archipelago is basically a sinkable island, and Russia has every capability for such a nuclear retaliation. And Ireland literally flew into a rage.

“Of course as a neutral country, it wasn’t nice for Ireland to become collateral damage in Britain’s clash with Russia. That said, the Irish premier held his ground firmly.”

Kiselyov then played a recording, translated into Russian, of Mr Martin’s comments on the simulation.

“It’s very sinister, intimidatory-type tactics by the Russian Federation, but I don’t think anyone is going to be intimidated by it,” he said.

“I think it reflects a mindset that is worrying and not in touch with reality, and I think there should be an apology forthcoming in relation to that.”

Kiselyov went on to say he agrees, but that Mr Johnson should make the apology.

He also claimed talking about Russia’s nuclear capabilities was an “anti-war modality” and not intimidating.