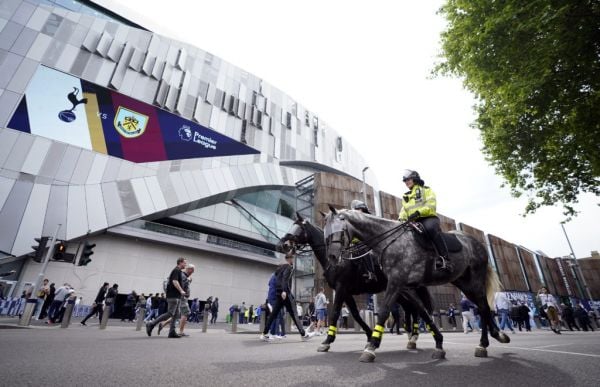 Two men have been arrested on suspicion of a racially aggravated public order offence during Tottenham’s game against Burnley on Sunday.

The Metropolitan Police said the men were ejected from the Burnley section of the stadium and arrested by officers before being taken into custody.

A statement on Tottenham’s official Twitter feed read: “The club can confirm two visiting supporters have been identified and arrested following  discriminatory gestures at today’s match.

We can confirm there have been three arrests in the away end today following reports of discrimination.
This is now a police investigation and, collectively, we will work with Tottenham Hotspur, Met Police and Lancs Police on this matter. https://t.co/4zHtnxYFbd

“We shall be supporting the police with their investigation.”

Burnley also pledged to work with Tottenham and both the Metropolitan Police and Lancashire Police on the matter.

In pictures: Wimbledon celebrates 100 years of Centre Court with past champions