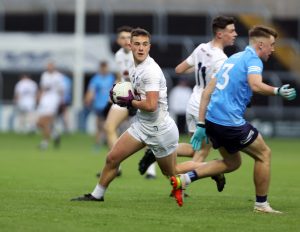 Killian Browne scored seven of Kildare eight points in the Leinster MFC Final on Wednesday night          Photo: Sean BrillyKildare never played with the flair and fluency that saw them through the Group Stages of the Championship and but for some wayward shooting by the Dubs, they recorded twelve wides, then the winning margin might have been greater than eight points in the end.

Granted Kildare had definite claims for a penalty in the 53rd minute when the Dublin keeper, David Leonard, clashed with Eoin Cully but Meath Referee, Patrick Coyle, who won’t be getting many Christmas cards from very dissatisfied Kildare supporters, inexplicably, waved the claims away.

Having said that Kildare were lucky not to concede two goals in the space of a minute 10 mins from time when first Tom Kelly took one off the line and then keeper Fintan Quinn saved with his legs.

A Kildare defeat and the manner of the defeat could not have been be envisaged at half time as despite playing against a very strong breeze, the Lilywhites turned in a point up at 0-5 to 0-4 with four points coming from Killian Browne, three frees and a 45, and an opening score from Joey Cunningham.

Dublin introduced Charlie McMorrow and Clyde Burke at half time and they made a huge difference and coupled with powerful performances from Ryan Mitchell and Ciaran Donovan, Dublin were on the front foot immediately, scoring 1-2 inside the first five minutes, the goal coming from Mitchell three minutes after the restart.

Kildare, although never giving up, never recovered from this early Dublin onslaught and their only points of the half came from the boot of Browne, the Celbridge man ending up with seven of Kildare’s eight points on a disappointing night.

Dublin, meanwhile, despite recording six second half wides, still tacked on a further 1-4 before the end of the game with their second goal coming two minutes from the end of normal time from wing forward, Luke O’Boyle.

It’s the quarter finals now for Kildare and a big chance to redeem themselves as Dublin head straight for an All-Ireland semi-final.