KILDARE Minor Manager, Niall Cronin, has named his team to face Dublin in the Electric Ireland Leinster Minor Football Final in MW Hire O’Moore Park, Portlaoise on Wednesday evening at 7.30pm and the Naas man continues to freshen up his team as Kildare go in search of their 10th Leinster minor title. 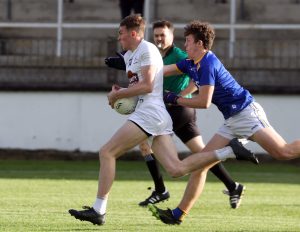 Ryan Sinkey lines out at midfield alongside Rian Rainey in the Leinster Minor Final against Dublin Photo: Sean Brilly

Niall Cramer and Cian O’Reilly, who came on as substitutes in the second half of the semi final win over Wicklow, have both retained their places for the Final with Raheens man Cramer slotting in a right corner back and his clubmate, O’Reilly, taking the left wing forward berth with TJ Nolan coming in at top of the right.

Joey Cunningham of Allenwood moves back to the defence with Naas’ Tom Kelly moving in the opposite direction. At midfield Ryan Sinkey of Naas and Ryan Rainey of Johnstownbridge renew their formidable partnership.

The team will once again be captained by James Harris of Castlemitchell.

Kildare qualified for Wednesday’s Final by virtue of a 2-18 to 0-10 victory over Wicklow while Dublin accounted for Offaly on a scoreline of 2-13 to 2-4. The sides last met in the Leinster Minor Final in 2019 with the Lilywhites winning through on a scoreline of 2-21 to  1-19.