HOT on the heels of Tuesday’s announcement that Kildare’s centre half forward, Ben McCormack, had been selected as GAA Footballer of the Week following his stellar performance against Westmeath in the Leinster SFC semi final in Croke Park on Sunday came the news that Adam Fanning had been selected as the Eirgrid Leinster U20 Football Player of the Year. 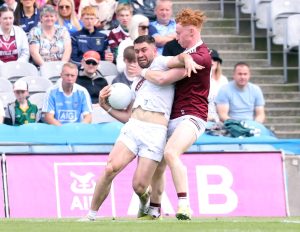 Great honours for both players, their clubs, families and county. 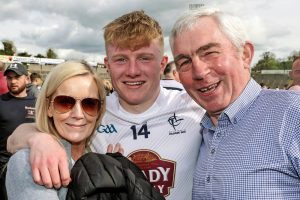 Sarsfields player McCormack followed up his performance in the defeat of Louth in the Leinster SFC Quarter Final with a high quality performance against Westmeath on Sunday, where he could be seen to telling effect in defence as well as in attack and he contributed 0-5 to Kildare’s total of 1-21 on the day.

Meanwhile Clane man, Adam Fanning, burst on to the U20 scene in Leinster in 2022 and was a handful for defenders during Kildare’s run to the Final where they defeated Laois and Offaly. In the Final against Dublin in Portlaoise Fanning was again in outstanding form and was a thorn in the side of the Dublin defence and he ended up scoring 0-4 of Kildare’s 0-17 which won them their second Leinster U20 title.

There were a number of the Kildare U20’s who would have been in the running for the Provincial Award but Fanning is a worthy recipient this year.