FOLLOWING on Tuesday evening’s semi final fixtures the stage is now set for the Finals of the Kildare LGFA Adult Leagues, which take place on Sunday at two venues in the county. 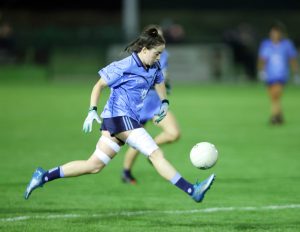 Angela McGuigan was part of the Eadestown team which won the championship last year and are now looking for a League double on Sunday Photo: Sean BrillyThere are three Finals at Manguard Plus Kildare GAA Centre of Excellence topped off by the meeting of defending county champions, Eadestown and Kilcullen at 6pm. Eadestown defeated Confey, last year’s Division 1 League champions, in a high scoring semi final, 6-12 to 3-13 while in the other semi final the youthful Kilcullen side had an equally impressive 5-14 to 2-12 win over St Laurence’s. 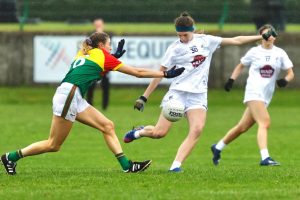 County player, Sydney Sheridan, will be one to watch for Kilcullen in Sunday’s League Final Photo: Karl GormleyBoth Eadestown and Kilcullen include county stars who helped Kildare win the Leinster LGFA Intermediate championship on Sunday last against Wexford in Carlow.

The county champions can boast the services of county captain, Grace Clifford and her midfield partner, Hazel McLoughlin while Kilcullen can call on Sydney Sheridan, who made her senior county debut recently. This should be an interesting encounter with two high scoring teams with the experience of the county champions just edging it, perhaps.

The Division 2 Final at 4pm sees Naas and Maynooth in action. In the semi finals Naas defeated Suncroft 3-5 to 1-8 while the Maynooth led Dervla McGinn, had a 2-25 to 3-6 win over Moorefield.

Proceedings will be opened on Sunday at Hawkfield at 2pm by the north west derby meeting of Kilcock and Cappagh. County player, Aoife Rattigan, may give Cappagh the edge in this one but it will be a close affair.

It’s a north V south clash in the Division 5 final where Raheens and Castlemitchell clash at 4.45pm while the Division 4 final at 6.30pm is a very interesting affair with outstanding county full back, Laoise Lenehan, facing the scorer of contender for goal of the season from last Sunday’s Leinster Final, Lara Curran and speedy county half back Lauren Murtagh. Who ever comes out on top in the Lenehan V Curran clash could well decide the winners of this one.

Yet another busy weekend on the Kildare LGFA front.

Entry Fee: €10 per adult; €5 OAP and Students (A ticket link for the purchase of tickets will be posted by Kildare LGFA in due course)