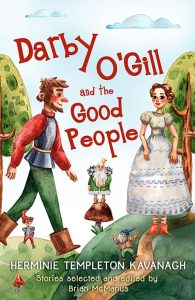 A PROSPEROUS man is on a mission to ensure that the original Darby O’Gill stories by Irish-American children’s author Herminie Templeton Kavanagh achieve a wider readership and greater appreciation.

Darby O’Gill and the Good People features six stories selected and edited by Dr Brian McManus; brilliant and enthralling stories that while making you both laugh and cry, also leave you desperate to know what happens next.

A nineteenth-century Ireland is depicted – steeped in the supernatural, it’s a place where both humans and fairies collide, both refusing to be defeated in their quest for the freedom to govern their own lives.

Readers witness the friendship between Tipperary farmer Darby O’Gill and King Brian Connors of the Good People grow. These two, who first thought that the differences between them meant that they were forever mortal enemies, later realise that circumstances unite rather than divide them.

The stories also celebrate the most powerful fairy of them all, the banshee, who is not really the scary villain that people sometimes imagine, but rather a career-minded, kind-hearted messenger from the Otherworld.

Brian explained that he was conducting research in Trinity College as part of a master’s programme and then a PhD and realised that everyone knows about Darby O’Gill, thanks to the Disney film, but not its literary origins. When he went back to look at these stories, he discovered how “brilliant” and “modern” they are.

He said the stories “really celebrate Ireland and Irish people”. He said they were written as a way for Irish Americans “to feel connected to Ireland and to explore their Irish identity,” adding that a lot of books written at the time were rooted in Irish mythology and folklore. He realised they weren’t available in a modern edition and thought that should be corrected.

According to Mercier Press, these delightful tales of genuine Irish folklore, full of charm, wittiness, and poignancy, will appeal to children of all ages. Brian has made some changes to the original stories to present them to modern readers at their absolute best, while still remaining true to the spirit and intention of Herminie Templeton Kavanagh.

“I’ve done a certain amount of re-writing/editing, just to make them as appealing and engaging as possible for children in the 21st century,” he said.

He says Darby O’Gill and the fantastical world of Good People he inhabits is a triumph of female strength and creativity. Unlike Walt Disney’s Darby O’Gill and the Little People (1959), where ‘pretty Irish girl’ Katie O’Gill leaves the adventures to the men in her life, the original brilliantly subversive, proto-feminist stories by Herminie Templeton Kavanagh (1861-1933) explore the reality of women’s constrained and precarious lives in the patriarchal society of the early twentieth century.

Struggling to support herself financially, Kavanagh created a thrillingly hilarious series of adventure stories featuring fairies from Irish folk tradition. Written in 1901, they celebrate the loyalty, kindness, determination, bravery and fierce intelligence of their female characters, chief amongst them being Darby’s wife Bridget, her sister Maureen and the indomitable banshee herself, an impressively sympathetic character.

As well as unleashing magic and mayhem to the delight of young Irish-American readers, the message imparted by Kavanagh’s six stories is one of women stepping out into the world and positioning themselves as equal to men. While not as radical a message today as it was when first written, it is still deeply resonant.

“The stories are much more modern and progressive in their representation of Ireland and Irish people than the film, even though the stories were written much before the film,” Brian said. “What Kavanagh does is she sort of subverts and undermines a lot of the stereotypes of Ireland… the Disney film would take the much more conventional, old-fashioned, traditional approach.”

He went on to say the stories were written by someone who was “really aware of Irish folk traditions” and how creatures like leprechauns and banshees “were actually represented in the oral traditions in Ireland.”

Darby O’Gill and the Good People is published by Mercier Press, priced at €12.99.