THE Kildare LGFA U14 and Minor teams have been named for their respective games in their national competitions on Saturday. 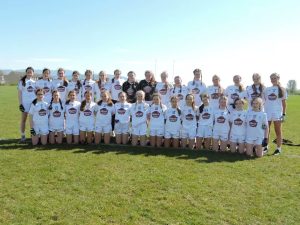 U14 Manager, Kevin Jones, has named his team for Saturday’s All Ireland Gold Final against Tipperary in Crettyard, throw in 1.30pm. Kildare defeated Tipperary 2-4 to 0-4 in the semi final. The Lilywhites trailed 0-0 to 0-4 at half time in that game but turned it around with 0-4 from Amy Jones and two goals from Aoife Treacy, despite a late goal from Limerick.

Tipperary man, Kevin Jones, now resident in Rathangan, manages the Kildare U14 team which includes his daughter Amy. On the Tipperary team is Amy’s cousin Grace Hogan so it will be an interesting weekend for the Jones and Hogan families.

The U14 team will be captained by Katie Ray.

Meanwhile Minor team Manager, Darren Kendrick, has announced to his team to play Dublin in Round 3 of the Leinster Minor Championship at 2pm on Saturday in TU Blanchardstown. Kildare defeated Meath 2-14 to 2-10 in Round 2 a month ago.