A voracious Kildare side made light work of first-time finalists Mayo to secure their fourth Christy Ring Cup in nine years at a sparsely attended Croke Park this evening. 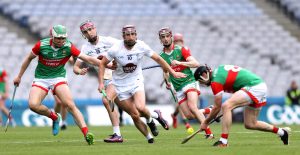 Kildare, who reached the final with an unblemished record of five wins and an average margin of nineteen points, proved far too good for a Mayo side they had beaten by thirty points in Ballina in their opening round robin game. They now regain their place in the McDonagh Cup for 2023 after one year away from the Tier 2 championship.

It was a case of men against boys at times, Kildare building an almost impenetrable blockade across their half-back line in the first half, keeping their hands around Mayo throats with absolute dominance of the underdogs’ puck outs, while the Lilywhite forward line were in sparkling form despite talisman Jack Sheridan starting on the bench after indifferent recent form.

With eight players from each team representing Naas and Toureen respectively, and the All-Ireland Intermediate Club semi-final between those sides having been as close as five points, it was a little disappointing that Mayo, who recovered from that opening day drubbing to win four on the trot, couldn’t produce a more competitive performance.

Kildare deserve plenty of credit for that, though. They won an incredible sixteen Mayo puckouts in the first half and with that sort of possession their forward power was always going to hold sway.

They settled into an early two-point lead (0-4 to 0-2) and struck for their first goal after ten minutes. Brian Byrne got behind the cover in the left corner and although his first effort was saved down low and Shane Ryan’s follow on was also blocked, captain Byrne picked up the pieces to fire home the loose ball.

With James Burke prominent from both balls and play, Kildare were ahead by 1-14 to 0-6 by the 31st minute and any hope of a Mayo comeback was put to bed when Cathal Dowling shrugged off Mayo full-back Stephen Coyne to bury the ball to the net for the second goal.

That helped Kildare to a half-time lead of fifteen points (2-17 to 0-8) and the game needed a couple of early goals in the second half. That didn’t happen but Mayo were much more competitive after the break and regained some pride with Kildare adding twelve points to their ten with the game played out with little more intensity than a challenge game.

For Kildare, Burke and Keegan were outstanding, scoring twenty points between them, while Byrne was always in the thick of the action. Simon Leacy and the two Boran brothers were the pick of a defence which laid such a solid foundation, particularly under the Mayo puckout.

Keegan was the star turn in the second half for the Lilies, scoring five excellent points from play to bring his tally to ten while Burke finished with eleven, eight from placed balls.