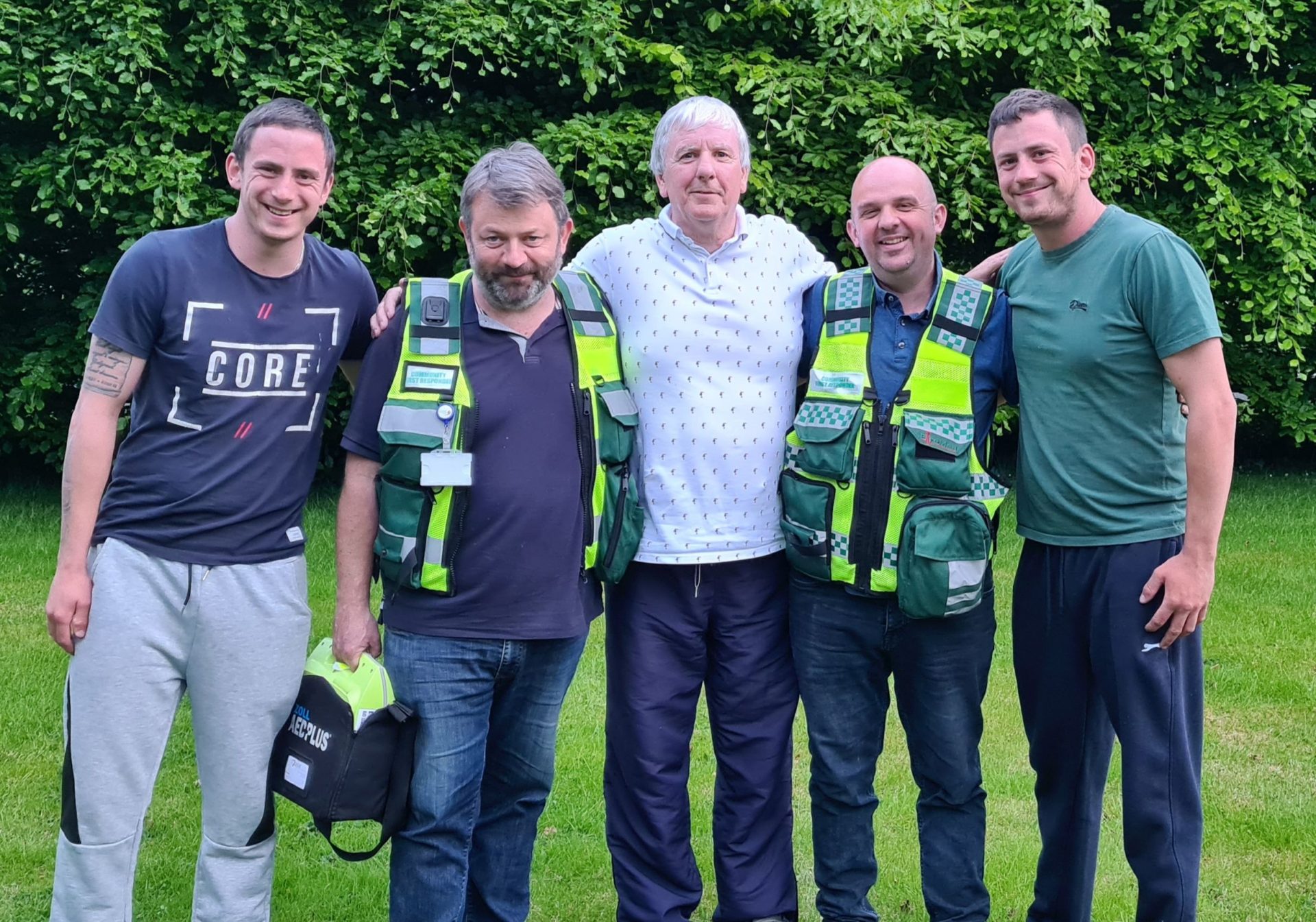 THE family of a local man whose life was saved by Castledermot first responders are “forever grateful”.

On the morning of Sunday 1 May, Seán Deere told his wife Martina that he didn’t feel great and was feeling a bit hot, and he decided to go lie down. But then he started to get a pain in the middle of his chest, so Martina told their son TJ to phone 999 for an ambulance.

“I did that and they activated the Castledermot first responders,” TJ told the ***Kildare Nationalist***. “Liam Mangan and Ronan Lambe attended to the house to my father. My next-door neighbour June Flynn, she’s a nurse, she came in as well.”

While the first responders were there, Seán had a cardiac arrest. TJ said his dad was lying in bed and was experiencing a sharp pain that was getting worse as time went on. He was given aspirin and a few minutes later June turned around and said he was unresponsive.

Describing what happened next TJ said: “Myself, my brother Killian, Ronan and Liam lifted him off the bed onto the floor and Liam started chest compressions and CPR while Ronan applied the defib pads and between the CPR and one shock of the defib, the two lads got him back around,” TJ recalled.

“He was awake and aware and chatting to everyone in the room by the time the ambulance even arrived on scene. He was taken to Naas General Hospital and then he was transferred up to St James’ Hospital where he had two stents fitted,” said TJ.

Less than a week after the terrifying ordeal, Seán was home with his wife and twin sons, and he also became a grandfather for the first time that week too.

It could have been a very different couple of weeks for this family, but first responders changed that outcome.

“He’s on the road to recovery,” said TJ. “He’s getting better every day.”

TJ was effusive in his praise for the local first responders. “They’re “saving lives in Castledermot and there’s no other way of saying it other than they’re an absolute credit to themselves and everyone in Castledermot.

“As a family, we can never thank them enough,” he said. “From the Deere family, we’re forever grateful for Castledermot first responders, especially Liam Mangan and Ronan Lambe, and we’d like to thank our next-door neighbour June Flynn as well… for all their assistance and help and support through that difficult time for the family.”

The Castledermot Responders Group are dispatched by the National Ambulance Service alongside the ambulance for certain calls, attending cardiac arrest, chest pains, stroke and choking incidents.

They’re trained to provide CPR and will bring an AED – an automated external defibrillator – in case it’s needed.

“As our group is made up of volunteers we may not always be available but we have never been so happy to be available on this day. Seán was already talking as he left in the ambulance,” a spokesperson for the group said.

According to the group, CPR and using an AED can be done by anybody. Seán’s story, they said, can remind people of the importance of volunteer first responders and hopefully more towns and villages will consider setting up a group in their area.

There is plenty of help out there from the National Ambulance Service and CFR Ireland in setting up a group. However, first responders and the ambulance service can’t be the first on scene – that normally falls to family members, work colleagues or bystanders. The chain of survival promotes five steps: 1 – call 999/112, 2 – start CPR, 3 – use an AED, 4 – ambulance, 5 – hospital.

Castledermot Responders Group have reminded people that calling 999/112 is the biggest priority and then starting CPR – knowing where your nearest AED is would be next. They explained that everything done even prior to volunteers or the ambulance arriving is vital in the chain of survival.

They’re running a free CPR and AED course soon and would love people to get in contact via their Facebook page (@CastledermotRespondersGroup) to book a place.