IN the second part of our conversation with Kildare Senior Football Selector/Coach, Johnny Doyle, which appears in this week’s Kildare Nationalist, in your shops now of on line at www.kildare-nationalist.ie, which we reprise below, the Allenwood man discusses the work he sees on an ongoing basis in Kildare in his role as Director of Football Development in the county.

PC: There has been tremendous success for Kildare teams at club, schools and county level in the last six months and in your role with Kildare GAA you see the amount of work ongoing to make this happen? 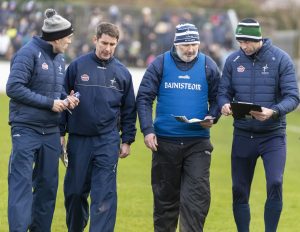 JD: A huge amount of work has been done over a long period of time. From the work side of things  you look at the work that goes on within clubs. We have a lot of GPO’s out there in certain clubs doing phenomenal work in supporting the volunteer. The volunteer coach and the work he or she does can never be overvalued. We have four and five year olds coming into a nursery in every club in the county now, on a Friday night. It’s about getting kids in and getting them moving. You might have everything set up then it’s mayhem but it’s about whetting their appetite and getting them an association with their club and who they are and where they are from. I’m involved with Allenwood U9’s and you’re thinking is this girl or this boy ever going to make it and then “bang” and you’re thinking where’s this after coming from.

You can imagine that going on in every one of the 55 clubs in the county. It’s a huge number of players and that goes into Cumann na mBunscol, into your secondary schools. We’ve seen the success of Naas, the Patricians are strong as are Clane and Maynooth. There’s huge work going on in those schools by so many people whether it’s Principals allowing it, teachers that may have no interest in Gaelic games covering other teachers who go out with teams.

We get players in for trials for Development Squads and you could have a queue at the gate from clubs as there is so much interest and so much willingness to be involved. It creates a brilliant quality of player coming through. Kildare is known the world over as the thoroughbred county but this is a football county. Hurling has grown hugely and it’s great to see it but nothing stirs the emotion and that tribalism than our football.

In our 14’s 15’s and 16’s we’ve widened the net trying to bring in as many players as possible into the Talent Academy to give as many people as possible an opportunity to progress in our pathway. We have 175 u14/15/16 players in our Talent Academy and then we have 35 at U17, 35 at U20  and that’s repeated at hurling so you have nearly 500 players playing Gaelic games coming through underage in Kildare. That takes an awful lot of organisation, an awful lot of finance. It needs parents to be supportive and the Co Board to be very supportive.

There are of course disappointments within that because there are phone calls to be made saying a player is a little bit off and I know what that’s like. I got it myself. I walked out of Hawkfield after being dropped at U21 level and I drove home and cried all the way. I was 19 years of age so I know what it feels like but sometimes there’s that resilience. There are players who played in an All-Ireland U20 final that didn’t play with a Development Squad.

I would have known other players who came in here at 14 like Harry O’Neill, Shane Farrell, Luke Killian and Darragh Swords so you see them from a very young age. You watch them grow and you watch them develop.

Every year we have that number coming through our Talent Academy and they could all be brilliant players but there are only certain positions to play on a team at senior level. You want the rest of the players to go back and be better club players. We try to be fair to players and we try and encourage them to be the best they can be. I’ve had good conversations with parents of 15 year olds and have said let him go off and play his soccer. He may be up in Shelbourne or wherever and if it doesn’t work out and he’s back playing with his GAA club and the club think he’s good enough we will take him back in and that is maybe reassurance for parents.

It is not our mantra in Kildare to make anyone choose or assign any code of conduct. They only thing we ask our players is that the effort and the way they carry themselves with the squads should be reflective of what they do with their clubs. The club is as important as what you do with the Talent Academy.

Long may the day last when we continue to see Johnny Doyle grace the GAA fields of Kildare and we all wish him and his colleagues the Very Best for the Leinster Final on Sunday.

In the meantime if you want to support the work being doing at development level within the county by Johnny Doyle and his colleagues in the Coaching and Games Programme, there is an opportunity of doing so through support of the Kildare GAA Annual Development Squads Golf Fundraiser which takes place in Newbridge Golf Club on Friday 15 July. Details from Declan O’Toole on 087 6442369.