IN this week’s Kildare Nationalist, in your shops now or on line at www.kildare-nationalist.ie, our columnist, The Supporter, looks at the success of the Kildare hurlers at LGFA teams and looks forward to the Leinster Football Final between Kildare and Dublin in Croke Park on Saturday evening at 5pm. The column also includes a stab at what the Kildare team might/could look like for Saturday.

“GET the Hell out of Dodge” may as well have been the motto for the Kildare hurlers these last couple of months.

The Christy Ring Cup is no place for a team of gunslingers such as ours. It has served its purpose over the past decade for us, whetting the appetite for silverware and big days in Croke Park. But no more. 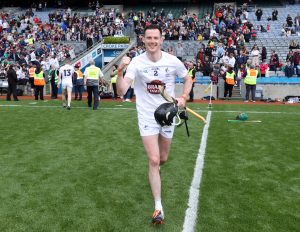 The Joy of it All: Niall O Munieachain was captain when Kildare won their first Christy Ring Cup in 2014 and he was still involved when they won their fourth title on Saturday Photo: Sean Brilly

Having Kildare in the Christy Ring Cup was like having Usain Bolt line up in the dad’s race at the school sports. There should really have been no teams relegated from the Joe McDonagh last year when the “round robin” consisted only of two games followed by a relegation play-off.      But we dropped out and it was testament to the character of David Herity, his management team, and the players that they not only stayed on for another shot but remained in Division 2A of the league despite the late availability of Naas players.

You can thank me afterwards, Glenn.

The Supporter appears in the Kildare Nationalist each Tuesday.