Kildare At Full Strength As Houlihan Returns For Leinster Final

GLENN Ryan and his Management Team received an enormous boost as they named their team to face Dublin in Saturday’s Leinster Senior Football Final against Dublin in Croke Park, throw in 5pm. 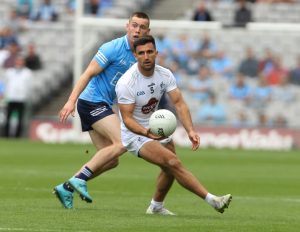 Moorefield man, Houlihan, missed the semi final win over Westmeath because of a hamstring injury which forced him to leave the pitch in the quarter final win over Louth and he was replaced by Mike Joyce in that game and in the subsequent Westmeath game.

Since his relocation to left corner back by Glenn Ryan for the Allianz League, Ryan Houlihan has give outstanding performances and he is seen as a vital cog in Kildare’s hopes of winning their 14th Leinster championship title and their first since 2000 when the team contained Glenn Ryan, as captain, as well as Anthony Rainbow, Johnny Doyle and Dermot Earley in the defeat of Dublin after a replay.

Kildare will otherwise line out the same as for the semi final two weeks ago.