A wretched Kildare, akin to rabbits caught in the headlights, were blown apart by a reborn Dublin in today’s Leinster Final in Croke Park, conceding five goals in just 22 first half minutes to end the game as a contest well before half-time. 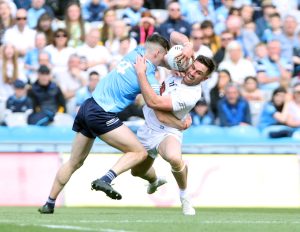 Ben McCormack is dragged back by Dublin’s Lee Gannon in Saturday’s Leinster SFC Final in Croke Park Photo: Sean BrillyFor all the optimism in the county beforehand, with the “galactico” management team on board and a rare league win over the Dubs in their back pocket, the post-mortems will be long and painful for a team that seemed bereft of spirit and backbone on the pitch and ill-equipped to deal with the nature of the modern game off it.

Sadly, the lack of intensity and openness that was evident against Mayo in the crunch final league tie and again against Westmeath two weeks ago, showed its face once more while Kildare showed little semblance of a modern defensive plan to shackle a Dublin side that couldn’t believe their luck.

Kildare did last five minutes longer than against Westmeath before the floodgates opened. Paul Cribbin and Dean Rock had exchanged early points but the ease with which Ciaran Kilkenny played in Con O’Callaghan for the opening goal beggared belief.

The Lilywhite defence was again asleep at the wheel two minutes later as Cormac Costello reacted quickest to a Rock point attempt that came back off the posts, Costello burying another past Mark Donnellan.

Dublin eased off for a short while before Seán Bugler played in Costello again and the Whitehall Colmcille’s man side-stepped Donnellan to make it 3-3 to 0-2 after only fifteen minutes.

Ben McCormack, who ended with a creditable five points but never reached earlier heights, had managed his second point for Kildare, their third overall, when John Small got in on the goalscoring act as Dublin continued to rip holes in a stationary defence. Still only 19 minutes gone: 4-3 to 0-3.

You looked to the sideline for changes, but none were forthcoming despite the disaster unfolding and Kildare were punished again after 26 minutes when Eoin Murchan’s long ball was gathered by Costello, and he played man-of-the-match O’Callaghan in for goal number five.

By half-time Kildare were behind 0-6 to 5-7 and reinforcements finally came with David Hyland and Paddy Woodgate replacing James Murray and an off-colour Darragh Kirwan and Kildare roused themselves after what was undoubtedly a half-time dressing down.

Dublin no doubt took their foot off the gas in the second half and Kildare can be grateful for that small mercy, the 12-in-a-row Leinster Champions happy to take their points rather than embellish their goal tally. You felt they could win by whatever score they chose.

Kildare outscored their opponents 1-9 to 0-10 in the second half with Jimmy Hyland on hand to palm home another goal after a good move involving McCormack and hard-working pair Daniel Flynn and Kevin Flynn in the 49th minute but an increasingly shapeless Kildare, try as they might, were never going to come close to reeling in the Dublin machine.

It feels like a huge step backwards for Kildare football after the promise of spring with this their joint biggest margin of defeat to Dublin in a Leinster Final (equal to the 3-13 to 0-8 drubbing in 1975).