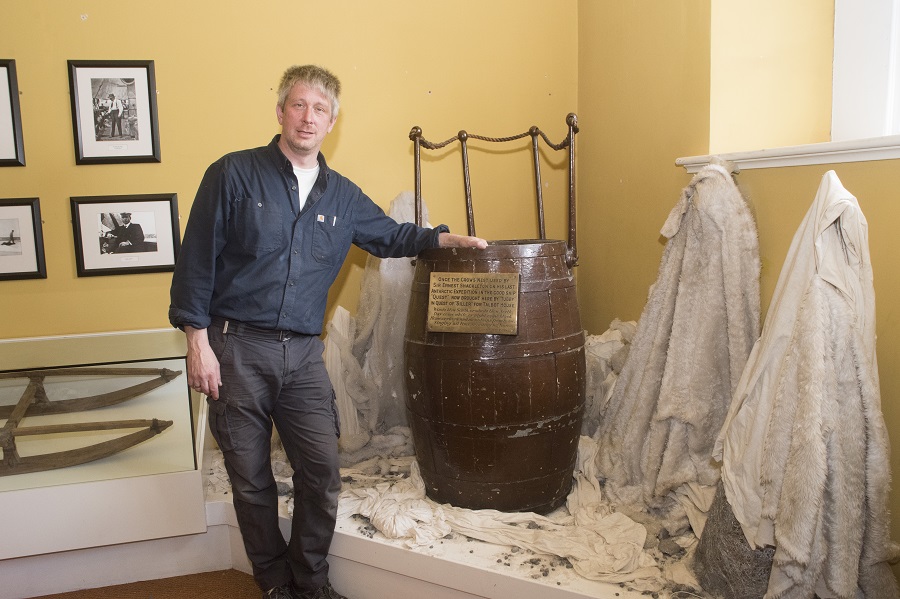 Sven Habermann with the crow’s nest in the Shackleton Museum. Photos: Peadar Doogue

The crow’s nest used by famed explorer Ernest Shackleton on his last Antarctic expedition aboard the Quest has departed the museum in Athy, bound for South Georgia.

Historical object conservator Sven Habermann, who has a workshop in Letterfrack, arrived at the town’s Shackleton Museum last Wednesday evening to collect the historic artefact.

Chatting to the Kildare Nationalist about prepping the crow’s nest for its long journey, Sven explained that the first step is a condition survey to establish how healthy it is, how stable, and potential weak points. In terms of packing, the crow’s nest will have a membrane around it, then some thin foam. It will travel inside a crate, stabilised with foam blocks, and the crate itself will be waterproof from the inside.

“This is going to travel quite some distance in a container, it will have some harsh weather and harsh circumstances, and on top of it because it goes to South Georgia and they’re particularly keen on biosecurity… we’re going to inspect it very thoroughly for any insects, for any molds, and to make sure that everything is pristinely clean,” he said.

The first stop for the crow’s nest was Letterfrack – Sven said he will then bring it to Bristol to a specialist shipping company that will look after all of the logistics.

He added that when it arrives at its destination, the curator of the museum in South Georgia (Jayne Pierce) will “look into the condition, if anything changed in transit, if it has any infestation in the meantime of any insects, any woodborers or anything else that was in there, and then once that’s declared clean and healthy, then it will be fully unpacked… they have a special quarantine area where they’re going to do this because they’re afraid that you will import insects or other animals into South Georgia which is pretty much a pristine environment.” 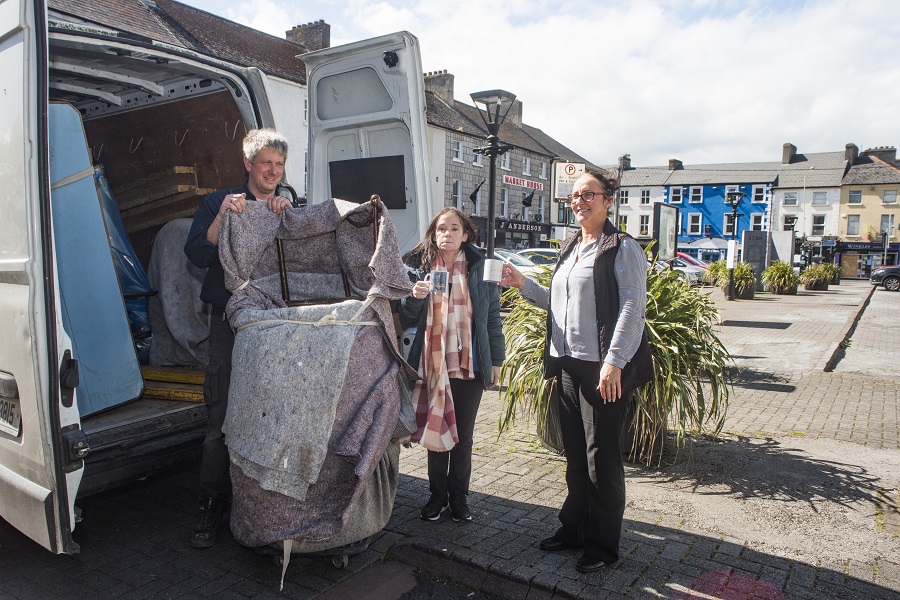 Museum staff toasted ‘The Boss’ (Shackleton) before the crow’s nest was loaded up!

During the refitting of the Quest, at Shackleton’s instruction the crow’s nest was added. Constructed like a normal wooden barrel, it was secured at the top of the main mast by two iron hoops. Shackleton had it fitted with an electric heater.

The crow’s nest had been on display in Athy for several months, having arrived on loan from All Hallows By The Tower in London. Margaret Walsh, Manager/Curator of the Shackleton Museum, explained that the museum in Grytviken, a former whaling station on the sub-Antarctic island of South Georgia (and Shackleton’s final resting place), is reopening and the crow’s nest will be there on display.

“It was a great attraction,” Margaret told me. “We would have got an awful lot of visitors coming to see it… the schools were fascinated with it.”

She added that Athy Sing and Sign Club are going to track it – a website will be set up and the crow’s nest will be tracked until it reaches its destination in South Georgia.

Sven, of course, featured in the recent RTÉ documentary Shackleton’s Cabin, a fascinating insight into his painstaking journey to bring the explorer’s cabin from the Quest back to its original state.

On 5 January 1922, Shackleton died of a heart attack in his cabin on what was to be his final expedition to the South Pole. With no appetite to continue, the crew returned home. Moored in Norway, the ship was broken apart, however one of the dockers had the foresight to remove Shackleton’s cabin. He took it home and it served as his family’s garden shed for over 70 years.

The cabin was donated to the Shackleton Museum in Athy and the committee went about looking for the best person to head up the conservation of this priceless artefact. They went knocking on Sven’s door.

Sven explained that at the moment they’ve stopped all work until the museum is finished (a major redevelopment project is being undertaken), as they will have to insert it on the first floor “through a hole in the building. So, for that, we [will] have to pretty much take everything out again.”

But the restoration is nearly there – “everything is stable, we’ve recreated the interior as you could see on the documentary.”