KILDARE LGFA face into a season defining game at St Brigid’s GAA, Kiltoom in Roscommon on Sunday afternoon (throw in 2pm) as not only must they beat the home side but, after last Sunday’s 3-9 to 1-9 reversal against Longford at home in St Conleth’s Park, Sean Finnegan’s team must win this three team Group C Round 2 game by seven clear points.

It is fitting that the game is in St Brigid’s as maybe Kildare’s patron saint can bring some divine intervention to the Lilywhites. 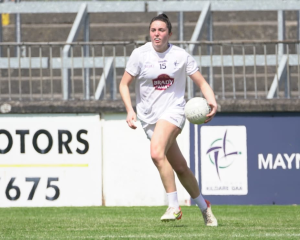 A good supply of ball to Lara Curran and her colleague is vital to Kildare’s success on Sunday Photo: Aisling Hyland

After losing the Division 3 League semi final to the Rossies this might be a difficult task, you might think, but this Kildare team has the ability, the skill and the resolve to deliver the required result on the day, if they can stop the concession of goals, something that has been their Achilles heal all season including Sunday last and in that League semi final against Roscommon.

Quite what went wrong last Sunday is hard to fathom such was the complete off colour performance of the Lilywhites in St Conleth’s Park, a display which even had their manager perplexed.

One theory advanced, but not proven, was the work load that has been imposed on the county players over the last few months where they were obliged to play club League matches on a Tuesday, just two days after big county games, whether League or Championship, followed by another big match in either competition five days later. Club League finals were also played during this time frame, unbelievably.

Such a schedule was mightily taxing, mentally and physically,  on the players but it also deprived Finnegan and his coaching staff opportunities to have meaningful coaching and training sessions between intercounty games. If, God forbid, Kildare were to lose on Sunday, and therefore exit the All Ireland series, then the fixture makers in Kildare LGFA will need to have a serious look at their fixtures schedule and perhaps themselves.

Back to Sunday’s game in St Brigid’s and Sean Finnegan has named the same side as he named in advance of the Longford game.  Although there were late changes to the starting 15 for that game, the expectation is that the team named will be the team that will start on Sunday.

Kildare cannot afford to be as open at the back as they have been of late (where have we heard that before?) as League Champions, Roscommon, who will have World Boxing Gold Medallist, Lisa O’Rourke in the starting line up or on the bench, have the ability to punish, as they did in the League semi final.

On the other hand Kildare have a formidable and potent forward line that is capable of delivering with a supply of good ball. While the Lilywhites cannot afford to be too expansive with their game plan, at the same time they must be brave in their approach and in their execution.