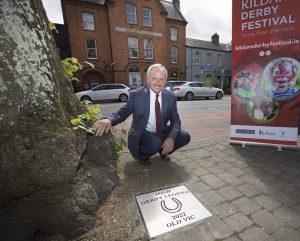 The former Irish and French Derby winning horse Old Vic became the latest recipient of the Kildare Derby Festival’s Hall of Fame award and the multiple US and European classic winning rider from the USA, Steve Cauthen was on hand to receive the award at the Curragh Racecourse as he also helped launch the 2022 Dubai Duty Free Irish Derby. Previous recipients of the Kildare Derby Festival’s Hall of Fame were Christy Roche and Sinndar. The honour recognises the fact that Old Vic’s owner Sheikh Mohammed donated the 1989 Irish Derby prizemoney to the Curragh Racecourse and this was used to start what is now one of the best all weather gallops in the world which is named after the great horse ridden by Steve Cauthen who himself won an Irish Derby and two Irish Oaks at Ireland’s racing HQ.

The 157th running of one of the most prestigious races in the international racing calendar, The Dubai Duty Free Irish Derby, taking place from the 24 – 26 June, finishes off the Kildare Derby Festival which runs a full programme of events will in the town from 18 to 26 June 2022 with something for everyone to enjoy and will include music from acts including The Blizzards, Derby Legends Museum, the annual Thoroughbred Run, Derby Legends Talks, Historical Walk and Eimear Quinn’s concert at St. Brigid’s Cathedral. The Dubai Duty Free Irish Derby Festival, renowned across the nation for its glamour and style, celebrities, fun seekers and racing enthusiasts alike, and will attract the crème de la crème from the international equine world; all competing to win the jewel in the crown of Irish racing and one of the ultimate and most valuable accolades in Irish sport.

Speaking at the event Old Vic’s former jockey Steve Cauthen said “Its great to be back in the Curragh and relive my memories of Old Vic’s Irish Derby. Its great to see the gallop named after the great horse that’s goes up the through the middle of the racecourse and which reminds me of how great a race the Irish Derby is.”

Chairperson of the Kildare Derby Festival Orla Murtagh said “Its brilliant now to have launched the Kildare Derby Festival and special to have Steve Cauthen here with his relationship with Old Vic winning the Irish Derby 33 years ago. There’s great anticipation and a sense of ‘we’re’ next now after the Epsom Derby last weekend as the Dubai Duty Free Irish Derby is such a special event in the middle of the racing calendar. I’m very proud of the committee for the Kildare Derby Festival, they put such trojan work into organising so many events and we’re especially looking forward to Eimear Quinn in concert in the cathedral that week and as a festival we want to complement the racing at the Curragh that weekend. We’re grateful to sponsors Rockshore as immediately after racing on the Saturday night of the Irish Derby for helping us create a lovely carnival atmosphere with The Blizzards in concert in Kildare Town.”

As well as world class racing, crowds attending over the course of this fabulous three-day festival at The Curragh will have post-race parties to look forward to, headlined by Qween on Friday evening and Smash Hits on Saturday. Fashion and millinery will be the barometer of style on Dubai Duty Free Irish Derby Day, with many attendees putting their best foot forward in the hope of winning the covetable Dubai Duty Free “Most Stylish” prize in association with The K Club with prizes for both Ladies and Men judged by a panel of celebrity judges. Day 3 of the Festival, Sunday, 26 June is all about families with lots of free activities for children in the Curragh Kids Zone.