A restructured Kildare side put some pride back in the jersey but came up just short against Mayo in front of a sparse crowd in the All Ireland Senior Football qualifier at Croke Park on Saturday night. 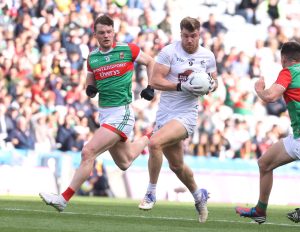 Kevin O’Callaghan bursts through the Mayo defence in Saturday’s All Ireland SFC Round 2 game in Croke Park Photo: Sean Brilly

With five personnel changes from the drubbing by Dublin in the Leinster Final and with a more defensive structure that saw Fergal Conway sitting back as a sweeper and Alex Beirne joining him when Mayo had possession, Kildare looked like winners for most of the game.

When the Lilywhites stretched a three-point half-time lead out to six within six minutes of the restart and with Mayo looking lethargic and misfiring badly in attack, it looked as if Kildare’s greater intensity and energy would see them home.

But the game turned in a crucial spell between the 44th and 51st minutes as Mayo suddenly found their shooting boots, outscoring Kildare by five points to one and, crucially, Kildare saw two goalscoring opportunities slip by.

First, Daniel Flynn, who roamed superbly around Croke Park all evening, breezed past three Mayo defenders but saw Enda Hession get in a crucial block to divert the danger.

Then, with the gap down to three points on 50 minutes, Ben McCormack got inside Oisin Mullen inside the penalty area but was wrongly adjudged by referee Derek O’Mahoney to have picked the ball off the ground.

Hitting the net on either occasion surely would have put the game to bed, even against renowned battlers Mayo. As it was, the seasoned Connacht men went back to the well once more and found sustenance.

They were still three behind on the hour mark, but two minutes later full back Mullen spun away from three would-be tacklers, played a one-two with Padraig O’Hora that opened up the Kildare defence and buried it to Aaron O’Neill’s net at the Hill 16 end where Kildare have now conceded nine goals in three halves of football.

That levelled matters and, truthfully, you could only see one winner at that point. Fergal Boland shot Mayo ahead in the 65th minute, the first time since the game’s opening score they had been in front, and although the excellent Shea Ryan fisted an equaliser that proved to be Kildare’s only score in the game’s last 22 minutes, including injury time.

With Mayo putting O’Neill under pressure on kickouts on his championship debut, they had the momentum now and Cillian O’Connor and Darren McHale points saw them go two clear heading into injury time.

O’Neill tried to supplement the attacking effort but paid the ultimate cost for that when Jordan Flynn, who may have been going for a point, lobbed the Carbury man for a second Mayo goal with the last kick of the game, five minutes into injury time.

A five-point margin didn’t do Kildare justice and they will rue some wild shooting of their own in the crucial middle of the second half. If anything, the closeness of the exchanges made this an even more frustrating reversal than the Dublin one.

One that slipped away for sure, but Mayo knew how to get the job done and an eleven-point turnaround from the 44th minute onwards is hard to argue with.

For Kildare, Kevin O’Callaghan was outstanding at midfield, particularly in the first half, weighing in with two big points, Kevin Flynn drove at the heart of Mayo constantly and Kevin Feely’s passing and fielding was exceptional. Ryan was outstanding at the back as well as coming forward.

With the defensive solidity, though, came a less fruitful day at the office for the forwards, with the full forward line only registering a point each from play and Ben McCormack managing two. Goalscoring has been a problem all year, along with concessions at the other end and ultimately that told again tonight.