LEIXLIP born Republic of Ireland Ireland international Nathan Collins admits there is more to come from him, despite his impressive start to life with the Boys in Green as a senior international over the last week or so. 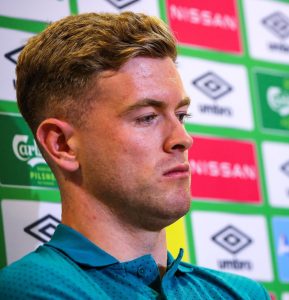 Despite Ireland’s recent malaise, with recent defeats to Armenia and the Ukraine, Collins, who celebrated his 21st birthday on 30 April, has been one of the few bright sparks, impressing with a number of composed performances.

However, the Burnley defender has explained at the Republic of Ireland Press Conference on Friday, that while he is pleased with his contributions, he still thinks there is more to come.

“On a personal note I think I have done alright,” he explains. “I watch back my games and look at what I can improve on.

“There is still a lot to go, and there are still a few things. I’ve done well overall, but I have still conceded two goals in two games.

“Maybe I can do a bit more to help the team prevent them, and if we didn’t concede two goals in two games we wouldn’t have lost them.

“As much as people are giving me praise, I still think I can do better and improve a lot. I’d prefer to win.”

During the 2021/22 Premier League season, Collins established himself as one of the most talented young defenders in the top-flight.

Although, it was a debut campaign that ended in heartache for the Leixlip defender as Burnley’s recent stay in the Premier League drew to a close.

Collins, impressed as the Clarets succumbed to their fate, and believes that he is now a better player after being exposed to the Premier League.

“I’ve enjoyed it and I love it,” he adds on playing for Ireland while playing in the English top-flight.

“I’d imagine that the Premier League has helped. I love playing there against the players, and coming into the internationals, I love playing for Ireland.

“I love the style of play and the freedom the manager [Stephen Kenny] gives me. I really enjoy it,” he concluded.

The Republic of Ireland play Scotland in the UEFA Nations League B Group 1 game on Saturday in the Aviva Stadium KO 5pm and Ukraine in Lodz, Poland on Tuesday, KO 7.45pm.