KILDARE Camogie Manager, Joe Quaid, has made two changes to his starting 15 for Saturday’s Glen Dimplex All Ireland Intermediate Championship Round 3 game against Wexford in Hawkfield. 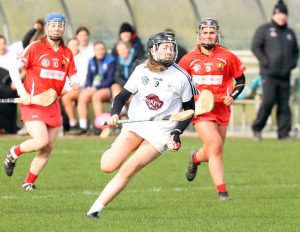 Aoife Stynes is again listed at right half forward for Saturday’s Round 3 game against Wexford at Hawkfield Photo: Sean Brilly

Grainne Noone, a substitute against Derry on Saturday last, comes in at left corner back and Chanice Corcoran, who has mostly appeared in the forwards, is listed at right half back. There is a new midfield partnership in Deirbhile Byrne, who started there last week and Kelly Perkins, who moves out from the left corner back position.

As Joe Quaid continues to shore things up at the back the overall performance is one of improvement and development and a championship win is not far off, if not on this Saturday.