A lot of talk after the game about regaining pride, showing spirit, proving we can do it in Croke Park. Some of that no doubt true. But we lost. Again. After leading by six points in the second half. Against possibly the worst Mayo team in a decade. 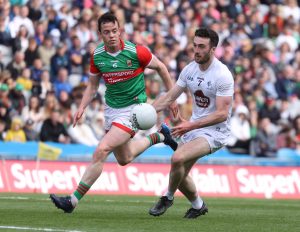 Kevin Flynn on one of his many surging runs for Kildare in the All Ireland SFC Round 2 game in Croke Park on Saturday night Photo: Sean Brilly

A lot like the league campaign really. Blood and thunder in Newbridge, legs gone to jelly on the road. Two goals scored, nine conceded.

On to Leinster and one excellent performance against Louth before the floodgates opened. Seven goals conceded in two games in Croke Park. Whatever hard luck story there was about the league, the championship was a different animal. Cold hard reality on summer ground. Carved open by an average Division 3 team but sure we’ll go toe to toe with Dublin, they’re not what they once were. They won’t be a match for our forwards.

Those forwards scored four goals from play in nine games prior to the Leinster Final and the team had an overall shooting accuracy of 58% we’re told by those who track these things. The four forwards we pinned our hopes on against Dublin posted 77% (good), 60%, 56% and 36% accuracy stats for the season.

Now I’m not sure how that compares with other counties and their marquee forwards although I strongly suspect it wouldn’t be seen as stellar. Dublin’s was 75% in the first half of the Leinster Final I can tell you as I went back to watch it as penance.

We all know what transpired at the other end over those 35 minutes and as Malachy Clerkin conveniently pointed out in the Irish Times on the morning of Saturday’s match, it wasn’t the first time Kildare had conceded five goals in recent times. Or five or indeed seven in one half.

But yes, it is fair to say that some pride was restored on Saturday night and there were no supporters leaving Croke Park at half-time on this occasion. Which is their right by the way, it’s their money and their time we’re talking about and there’s been 16 let-downs now in 19 trips to Drumcondra.

The majority of Kildare fans voted with their feet on Saturday too, parking them in the slippers at home, and again I don’t blame them. The GAA were off their collective rockers fixing those two games for the Big Blue House and eventually supporters snap. There can’t have been 10,000 in the place at any one time on Saturday.

As for the match, the management reacted finally to a deficiency that was glaringly obvious as far back as our second league game against Donegal and opted for a set-up I’d suggested they use before the Leinster Final. Didn’t get a word of thanks either.

It worked too, to a large degree, but we don’t need to pretend it was rocket science to place Fergal Conway back as a permanent plus one and have the other “wing forward” track back when needed. That’s just modern football and should have been attempted before our eleventh game of the season.

There had been talk of such a system being trialled in challenge games in the lead up to the Championship so I’m not sure why it was thrown out, but the team did look as if they had at least some familiarity with defending in greater numbers and for the first half you couldn’t fault the efforts.

Mayo were absolutely shocking, though, during that period. When they play badly there’s no worse “big” team in Ireland. Even their goal chance that Aaron O’Neill tipped over came from an inglorious attempt at the posts that turned into a Garryowen. They scored five times from fourteen shots in the opening half.

Now some of that can no doubt be attributed to Kildare defensive work. The blocking and turnovers were on a level far superior to what we’ve seen of late. But this was a Mayo side that looked out of ideas and out of road.

And yet we failed to put them away. We can blame the referee but that was just one incident. When the game was there for the taking, we reverted to type unfortunately, shooting poorly and taking wrong options. Dan’s shot at goal when five points up and an easy point available a case in point.

Mayo hit a purple patch with some superb long-range points as they finally figured out how to beat our “blanket” but that was also due to some tiredness on our part I felt. After all, three of our defenders, Malone, Conway, and Hyland, had little or no game time in their legs.

That we only used two subs before injury time and, even then, only Conway of that trio being brought off seems like an oversight on the part of our sideline. Was there a lack of trust in the bench with a couple of defensive starters the last day now deemed unworthy of even providing respite to heavy-legged colleagues?

It also asks questions of our strength and conditioning, which looked so inferior against Dublin, that Mayo managed to outscore us in the last half-hour by 2-8 to 0-3, without playing any particularly majestic football. They were just able to run stronger and faster it seemed as Kildare tired. When Kildare are off the pace we seem to concede scores at a remarkable rate.

I have to admit, one of the changes I didn’t see happening was O’Neill being thrown into the lion’s den for a championship debut at this critical juncture. I think it was his first game in Croke Park since the Under 20 All Ireland Final four years ago.

Now the management team have clearly taken the view that Aaron needs blooding, or perhaps they simply see him as Mark Donnellan’s equal at this point, but there’s a lot to be said for experience between the sticks, particularly when you’ve built a new defence in the space of two weeks.

At the same time, it is hard to argue with changing a goalkeeper who conceded five goals and no doubt they’d be getting it in the neck if Donnellan was retained and it went pear-shaped. O’Neill copped a lot of flak on social media afterwards, very unfair for a young man making his debut but he won’t be happy with his own performance down the home stretch you’d imagine. One thing I would suggest is that county goalkeepers need to be playing between the sticks with their clubs, given how specialised the position is now. Neither of ours currently do.

Would I sum up the year as any sort of success? No, not really. I think the expectations Glenn and the boys would have set themselves would (or at least should) have been staying in Division 1, being competitive in a Leinster Final and reaching an All-Ireland Quarter Final.

None of those targets were achieved, there were only two wins against Division 3 league teams on the road in eight games and a failure to develop a clear, winning style of play.

I wouldn’t say we went backwards but we were certainly stuck in neutral. The Dream Team have a big seven months ahead of them while we the supporters go back to mowing the lawn and cleaning the car like normal people at weekends. At least until the club championship.