Our coverage of Kildare Athletics from Tuesday’s Kildare Nationalist.

IT has been another trans-European adventure for Irish athletes this past week, with meets being held in Holland, Slovakia, Switzerland, Sweden, Norway and Italy. Jacob Ingebrigtsen stuck to home turf over the shorter distance of 800m and he finished in 4th place with a time of 1.47, in Bergen. Not the usual win we see over the 1500m or longer distances. 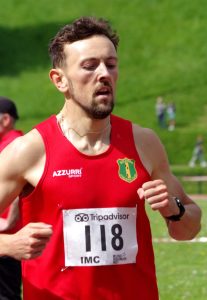 Kildare AC athlete, John Fitzsimons, raced the PTS meet in Samorin, Slovakia. In a good quality field he finished in 3rd place in a time of 1.46.64, marginally faster than Ingebrigtsen had clocked. Like many 800m races, the athletes were bunched together for the first lap with four athletes pulling slightly ahead after 400m. With 200m to go the race was on and Fitzsimons was in a three-way battle with Catalio Tecuceanu (Italy) and Ben Pattison (UK), having dropped the Qatar athlete with the increased speed.

Around the bend and coming into the home straight it was still anyone’s race. Fitzsimons tried to move up a great and take the Tecureanu and Pattison from lane 2. Both athletes responded. The final spring to the line saw Tecureanu take the victory with a photo finish placing Fitzsimons in 3rd. Another good run for him. At the same meet there was more good news. Limerick athlete, Sarah Lavin finished 2nd in the 100m hurdles in a new PB of 12.94 while Chris O’Donnell (Galway) won the 400m in . 46.44.

Meanwhile in Geneva Israel Olatunde ran yet another 100m PB. Rome was the venue for the prestigious Diamond League meet with Ireland’s Ciara Mageean being the only representative. Ciara Mageean finished 4th and posted a season’s best time in the 1500m with a time of four minutes 5.44 seconds in a tactical race won by Ethiopia’s Hirut Meshesha.

18 Medals for Kildare at the Leinster Relays

As a county Kildare took home 18 sets of medals from the Leinster Relays held at the Le Cheile track in Leixlip last Sunday. These were five gold, eight silver and seven bronze. In fact three clubs from the provence seem to have the gold medal haul all wrapped up. They are Ratoath, Kilkenny City Harriers and Crookstown-Millview.

Crookstown-Millview had great success with nine sets of medals and three of these teams securing gold. Newbridge won six sets of medals with two of these gold, while other clubs such as Clane, Suncroft and St Coca’s shared in on the medal haul.

Kildare have such depth of talent across all clubs in the girls u9 as evidenced by the county having five teams in the eight lane final. Clane AC were the leading team when they produced a stunning final leg to take the bronze medal. The first set of Crookstown/Millviews gold medals came in the girls u12, when the team of Grace Joyce, Florence Harte, Ella Louise Donnelly and Niamh O’Shea), third were Suncroft (Ella Hanlon, Anna Dillon, Isobel Burns, Lucy Cousins). For a while it looked like a day of silvers for the club when the Girls u14, 16 and 18 teams were all runners up. However, two more golds came in the form of their Boys U18 and U19.

St Coca’s Boys U10’s had a great victory over Kilkenny City Harriers with Newbridge in 3rd. Then it was Newbridge AC’s turn to bring home the gold. Their Boys U12 and U13 teams were like lightening on the track. It was a close call in the Boys U12 as they battled with Ratoath for the entire 400m. A mighty effort over the last 30m say the green singlet of Newbridge surge to the line ahead of the Meath team. Clane AC were in 3rd. The Boys U13 had a little easier passage to the podium, when they led from start to finish, to win by over two seconds from Clane AC. These clubs will now go forward to represent Leinster at the National Relay Championships in July.

In the Leinster Combined events in Carlow last Saturday, eager athletes turned out to be the nation’s next rising multi-eventers. With Kate O’Connor the Irish U23 European Silver medallist as their role model, there is every chance that one of those athletes that competed might become the next European championship medallist. It all starts somewhere.

The Girls U13 Tri event, which features 200m. Long Jump and Shot Putt, proved to be a very closely contested competition. With over thirty athletes competing, it was the largest field on the day. Kilkenny athlete Rachel Duff (Gowran) was the runaway winner, but the next two medal places were well fought. In the end Clane’s Hannah McBride lost out by the smallest of margins – just another two or three centimetres in the shot putt or long jump and the bronze could have been hers. Oliva Smith (Newbridge) was not far behind in 5th.

Robert Gleeson (Newbridge) was a little luckier in the Boys U13 Tri when he secured a silver medal behind Adam Kelly (St Abbans).

The pentathlon as the names suggest consists of five events; Long Jump, High Jump, Hurdles, Shot and 800m. It is the final event, the 800m that is often the decider for most age groups. For many athletes this can be their weakest event. Therefor a good 800m runner can often jump from 6th place to medal position. The pentathlon is never over, and a medal position never secured until this final race has been run. 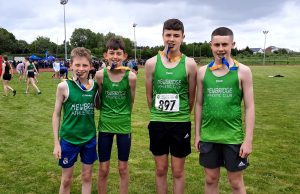 In the Girls U14, right through the competition, the competition was intense, with the leader board changing after each event. Leah Tisdell (Naas) did very well to finish in 5th place. She did produce a very good 800m – another half a second would have secured bronze for her – so close was the result.

Kildare was well represented in the Boys U14, with half the total starters being from the county. With such a ratio, there was bound to be a Kildare athlete on the podium. And there was. Jack Gilmatin (Celbridge) was 2nd. He did a very good long jump but it was his excellent 800m that sealed his medal position, taking him from 5th place into 2nd. Newbridge have some great budding multi-eventers in this age group with the club finishing in 4th, 5th and 7th position. 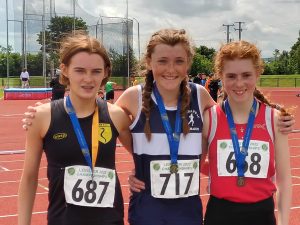 The U16 Girls was an exciting pentathlon. After a good solid victory and fast time in the hurdles, Sarah Kiernan (Naas) took a big lead. This lead was further extended when she jumped 4.87 in the Long Jump. However, the gap narrowed somewhat when Kilkenny athlete Eve Dunphy (St Senans) threw 36cm further in the shot putt. This gap closed again when Dunphy jumped 9cm higher in the high jump. The final event of the day, the 800m was going to be very interesting. With a decent enough 800m Sarah tried her best. However, she was not prepared for the blistering pace set by Dunphy in the first lap. Kiernan had to settle for the silver medal but some positive take away points. Had she run the 2.33 she ran in the indoors the gold would have been hers. It was also silver for Alex Heeney (Clane) in the Boys U16. Once again, it was the 800m that cost Heeney the gold medal.