Our take on the Kildare Minors and Seniors defeats to Mayo last weekend from this week’s Kildare Nationalist.

THERE was a lot of talk over the weekend about pride being restored in the Kildare jersey. I don’t buy that. Every player who dons the Lilywhite jersey always had pride in the jersey and will always have pride in that jersey. You only have to talk to them at any level and they will tell you so. The amount of work they put in from November to whenever they exit the championship in hurling or football at U17, U20 or senior level tells you of their desire to play for Kildare. 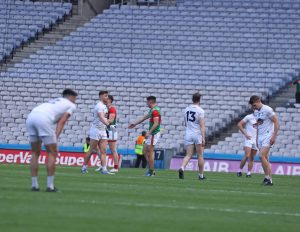 The disappointment can be seen on the faces of the Kildare players    Photo: Sean Brilly

The amount of work that the Management Teams of all six intercounty teams put in is also testament to the desire they have to make things work for Kildare at inter county level. You only have to look at the utter dejection of the players and the management teams when defeats are suffered. Supporters too feel the pain of loss of their county teams.

With all this work going on by the players, by the management teams, by the County Board Officers and Games and Coaching staff why has it been so long since Kildare won a senior Leinster title never mind a senior All Ireland.

Progress was made throughout the year with Leinster Finals being reached and an All Ireland Final reached by the U20 side.

We mentioned it in these pages a few weeks ago. These losses just didn’t happen this year, the have being going on for a long time despite the fact that we have some of the best footballers on a regular basis in the county. We suggested that some sort of examination take place as to what the players and management teams need to get them over these big days.

Minor Football Manager, Niall Cronin, hit the nail on the head after the defeat of his side by Mayo in the All Ireland Quarter Final on Sunday. What can be done to help these lads to fulfill their potential, he was asked?

“I don’t know if I have the answer for that today but I definitely think it’s a conversation that we have to have,” Niall Cronin told us. “I don’t know is it U17 V U18 or U19 but there definitely has to be a conversation. I’m sure very minor manager will say this when their season ends. There is a lot of intercounty experience in that dressing room with me in terms of Hughie Lynch or Leper (Eamonn Callaghan) and James Devane and his experience so they can’t all be wrong.”

“There are a lot of good players here and when they are 20/21/22 years of age they will be a big benefit to Kildare football.”

“I think it is important that the right people need to sit down and talk about it. The work that Johnny Doyle and Paul Divilly do as a pathway is massive and if there is anything that anyone can do to help that it needs to be done. We can’t just not be winning Leinster championships or big games because we’re from Kildare. There are great footballers in this county and we should be proud to represent Kildare and we should be able to compete with anyone. Geography shouldn’t come into it if we put the right systems in place and put the right development in place,” were the strong words that Cronin uttered.

Warming to the task he added, “We saw that last night against one of the best teams in the country we were there toe to toe and were very close to getting a result that nobody thought was possible and people need to get behind this county now and the get behind the U17’s, U20’s and seniors and not be giving out about where matches are being played and who’s being picked and who’s not being picked.”

“Every Management Team goes out there to pick the right team and we’d all make changes if we could but the county has to get behind the teams now. It must have cost some money to follow the Mayo seniors over the last 10 or 15 years but they still outnumbered Kildare last night in Croke Park. A lot of Kildare people who are willing to get out now who nearly missed an historic night in Croke Park. It’s about the county uniting now and not just this thing of giving out and picking holes. If you have something to bring to the table then bring it and let’s unite and drive this thing on for the next four or five years and stop giving out about things that we can’t control.”

Wise words indeed and hopefully words that will be heeded. The conversation begins now.