Maynooth University Town FC (MUTFC), who reached the quarter final of the Extra.ie FAI Cup last season, were drawn at home to Waterford’s Villa FC in Round 1 of the 2022 competition when the draw was made at FAI Headquarters in Abbotstown on Tuesday afternoon. 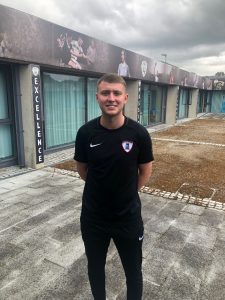 Maynooth University Town FC’s Jack O’Connor at the Draw for Round 1 of the Extra.ie FAI Cup in Abbotstown on Tuesday

This is a good draw for MUTFC as they have a home draw, they don’t have to travel to one of the clubs in Donegal, Derry or Cork and they have avoided League of Ireland opposition in Round 1.

Last season MUTFC beat SSE Airtricity League of Ireland First Division side Cobh Ramblers before losing out to Premier Division side, Bohemians in the Quarter Final.

Speaking to the Kildare Nationalist after the draw, MUTFC striker, Jack O’Connor said, “We were torn between whether we wanted a crack at one of the big teams away, for the financial side of it as well as the day out, but if we were going to draw a non-league team we wanted it at home. We definitely fancy our chances against any of the non-league teams that were in the draw. Hopefully we can put our ball in the pot for the next round.”

“I don’t know too much about Villa FC but what we do know whenever we play a team from non-league football, especially outside of Dublin. they will have a great togetherness, really tough to beat, set up well, coached well and they’ll leave everything on the pitch.”

Last year MUTFC played their FAI Cup match against Cobh Ramblers in the St Francis Ground but this year they are hoping to play the game at home. “We’ve put an Astro in on the Rathcoffey Road facility and we can manage that so it will be nice to have the game on what we can call our own patch which is a positive for us,” O’Connor maintains.

The experience of playing the FAI Cup matches against Cobh Ramblers and Bohemians is sure to stand to MUTFC, Jack O’Connor believes. “With the quality that we have in Maynooth and the players coming through the college we fancy our chances against any of the First Division teams.”

Round 1 of the 2022 Extra.ie FAI Cup will take place on the weekend of 31 July with dates, times and venues to be confirmed later.