IN this week’s Kildare Nationalist we carry a full report and pics on the performances of Kildare athletes, at home and abroad in the past week.

YOU know it has been a good week for any sport when there are lots of gold medals, happy faces and nothing but great reports on social media and now here in the Kildare Nationalist. Again, another week of action that focused on athletes at home and abroad. John Fitzsimons continued his continental tour, with a race in France, while here at home, the Leinster U14 – 19 Juvenile Championships in Tullamore. 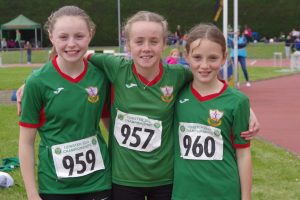 There have been several great French meets this summer, from Lyon, to Toulouse, Paris and Marseilles. For John Fitzsimons of Kildare AC, the meeting in Toulouse a few weeks ago, kick started his European racing tour with his second PB in just under ten days and the all-important European 800m qualifying standard.

A few more races and it was back to France again to the Demenÿ Stadium in Douai, close to the Belgian border in Northern France. Once famed for its extensive coal mining, Douai is now known for its automotive and chemical industries. However last week, neither cars nor chemicals were on the minds of its citizens as they tuned in for the annual meeting de Demi-Fond du Gayant. This traditional meeting attracts around one hundred and fifty athletes, who compete over four distances, 800m, 1000m, 1500m and 3000m, with the 800m as the centre piece.

John Fitzsimons was hailed the “Irishman, King of middle distance”, as his clever racing strategy instilled evocative images in the minds of the locals for the remainder of the evening. He usurped the firm favourites, Africans Ebrahim Alzofairi and Mohamed Belbachir to take the 800m title. Fitzsimons won the race in 1.46.

All top three athletes were looking for the 1.45.20 needed in order to qualify for the world championships in Eugene, Oregon in July. It was a tightly packed race, where the athletes stayed in a large group for almost 700m. This resulted in much jostling, with John managing to steer clear of trouble as athletes clipped heals and rubbed elbows, often breaking their stride pattern.

Sitting just behind the Africans, his red Kildare AC was easy to follow. Fitzsimons made his move with 100m to go and passed both athletes to stride home almost one full second ahead. There were six runners under 1.48. John will now return home to race the National Senior 800m next weekend, in the hope that he can challenge Mark English for the 800m title.

Also racing this weekend will be Kilcock’s Kevin Kelly in the 1500m. Kelly is home from the USA and will hope to at least emulate the bronze medal he secured in 2021.

36 GOLD MEDALS FOR KILDARE AT THE LEINSTER JUVENILE CHAMPIONSHIPS

Back in Tullamore, the home of Leinster Track and Field, juvenile athletes were attempting some goals of their own – the elusive top four placings needed to qualify for the National Juvenile Championships to be held at the same venue in July. A staggering thirty-six gold medals were won by athletes from clubs across the county of Kildare in a variety of events. While all athletes achieved some amazing goals, there were of course a few stand-out performances.

David Oghuvbu (Naas AC) was in a class of his own as he powered his way down the track to win both the 100m and 200m by a very comfortable margin. Staying with the sprinting events Celbridge AC athlete Leigh O’Brien has been showing great form since the start of the year. Running well in the indoors he continued that good form in Tullamore on Sunday when he won the U16 100m and 200m races and finished 2nd in the 400m.

There is no stopping Rys Johnson (Naas AC) either as he scored yet another middle-distance double. He easily won the 1500m on Saturday. Then with both a heat and final in the 800m, he made running look so easy as he stuck behind the leading bunch in the final and then put his head down and strode home for a comfortable victory to add the 800m title to his 1500m one.

One of the best races of the day was the boys U16 3000m where Mullingar’s Jamie Wallace was the pre-race favourite. From the beginning, Cillian Gleeson (Celbridge AC) did all the front running, content to let Wallace sit on his shoulder. With 1000m to go, Wallace decided to make a move, which was covered by Gleeson. With 600m to go Wallace attacked again and this time went to the front, leaving Gleeson tracking hard.

Long-time leader, Gleeson looked the less comfortable of the two. With 200m to go Wallace looked certain of victory, however Gleeson found a new gear and once again was in contention. With 100m to go the battle was on. Both boys raced each other, neither giving way. With 50m to go Gleeson regained his lead. With an exciting race over the last 50m, it was Gleeson who took the gold for Celbridge and Kildare.

Crookstown-Millview AC did very well in the field events. There was a double for Georgia Myerscough in the U14 Long and Triple jumps while the Javelin pair of Paddy Taylor and Conor Walsh threw another round of superb over 50m throws to get that one, two that they are now accustomed to, in their age group.

Kildare AC athlete Max Treacy once again demonstrated his dominance in the U17 middle distance races, when he strode home to a 1500m victory. Max Spellman (Clane AC) impressed in the Boys U15 Shot Putt as did Meave Clafferty (St Coca’s AC) in the Girls U17 3000m.

Newbridge AC have invested a lot of coaching into the race-walking events during the lockdowns and this is now yielding dividends. Eabha Brennan had a great victory in the Girls U14 race-walk, while Racheal Kearney ran a great race in the 800m. For North West Kildare Sadie Culnane took the clubs only medal of the day in the Girls U18 400m hurdles event.

In general, the Kildare clubs did really well, benefitting from their local competitions in the pre-season months. The athletes will now go onwards to the All Irelands in July.

Full Report and Pics in this week’s Kildare Nationalist, in your shops now.