Johnny Murtagh – The Jockey – Against The Odds

IN this week’s Kildare Nationalist, in your shops now, we carry a two page feature interview with former champion jockey and now successful trainer, Johnny Murtagh, and we now reprise the first part of that interview here as Johnny recalls his life as a champion jockey.

JP MURTAGH, known as Johnny to you and me, an outstanding jockey and now a successful horse trainer, was born in Bohermeen near Navan in Co Meath but now resides at Fox Covert Stables on the Curragh in Kildare with his wife Orla and children Caroline, Charles, Lauren and twins Grace and Tom. As a jockey Johnny Murtagh won all the flat race classics in Europe and also had success in the UAE, Hong Kong and the United States. As stable jockey to trainer, John Oxx, he had many successes on that Yard’s leading owner, the Aga Khan. 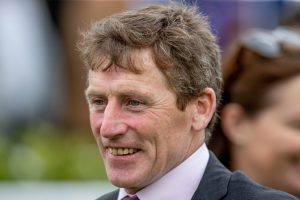 It could all have been different, though. for the young Johnny Murtagh who was a noted gaelic footballer and soccer player and was an All Ireland champion boxer at the age of 14. Because his aunt lived in Blackburn in England there was even the possibility that he would go for a soccer trial to Blackburn Rovers.

“I was full of dreams of being something in sport,” Johnny told us last week just before he brought some of his horses over to Ascot. As it happens a career, and a successful one, in the horse industry turned his dreams into reality. Murtagh started in the RACE Apprentice Academy in Kildare before being sent to the John Oxx Yard as an apprentice.

“My mother thought it might a good idea to get rid of me for the summer,” Johnny laughs, “but as soon as I got down there, I loved the atmosphere of it. I had never ridden a horse but my cousins had donkeys and ponies and I used to enjoy being around them and my uncles were big men for the Navan Races as we lived close by the track.

Murtagh served his apprenticeship with John Oxx at Currabeg and had his first ride in May 1987 and had his first winner on his third ride, “From May to November that year I had 12 winners, 22 the second year and I was Championship Apprentice the third year. It was a natural progression and I was flying.” 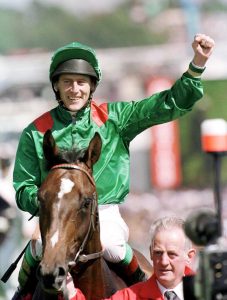 The Apprentice Jockey’s first win was on Chicago Style at Limerick. “I remember everything about it. I walked the track with Jimmy O’Neill, the Assistant Trainer, and I remember going through the plan of the race and I remember then a horse was flying down the outside. It was a photo finish. I remember a Head Travelling Lad for John Oxx, Patrick Corrigan, asking me if I thought I’d won and I said, yeah, I think I did, He said, well if you didn’t you should have so there was no softly, softly approach there. I was absolutely delighted when my number was called out.”

“The joy that of winning is just something you just can’t explain; it’s relief, it’s satisfaction, it’s a brilliant feeling; it just give you that rush. Luckily it never left me and I craved it then in the end,” Johnny tells us.

When the young Johnny Murtagh was starting off the Weigh Rooms were filled with legendary jockeys but the young apprentice was not fazed by that. “In Ireland I had Mick Kinane, Christy Roche, Stephen Crane, brilliant jockeys but very competitive, and although I was young, I felt I fitted in. I wasn’t afraid in any way. I was just so keen to take them on. OK I made a few mistakes and I usually get a “rollicking” off them but I learned from them as they were top, top jockeys and ultra-competitive.”

Moving across the water the legends were no less daunting. “Over in England there was Steve Cauthen, Walter Swinburn and Pat Eddery. I questioned myself, can I fit in here, do I fit in here but after a couple of trips over I said you know I think I can do this; I can mix in with the best of them,” the former champion jockey said.

“In the Weigh Room itself it’s a great place, great craic. It’s like a Locker Room there. Great memories are in there but as soon as you put on that helmet and walk out to the Parade Ring and the racing starts it’s every man for himself then,” Murtagh recalls.

It was a great learning curve for a young jockey according to Johnny Murtagh where a you learned quick and you learned fast otherwise you were left behind. “They knew I was coming and maybe I was a bit of a threat but I always felt that I was part of it. Even from a young age I was able to talk to them and they might “rollick” me out of it but it was done and dusted then the next race was on and they had enough on their own mind not to worry about me.”

“A fella said to me once, have a hard neck but be nice about it,” Johnny laughs. “When I got older myself, I was trying to do the same to young jockeys but I’d be hard but fair on them. You did see them as a threat but I still welcomed the opposition and the competition as well.”

It was a bit of golden era for jockeys Murtagh agrees.  “They were legends of the game and it’s only now that you realise that they were characters as well. They had that bit of mystery about them. It was definitely a Golden Age for jockeys and it was just a privilege to ride against them.”

Murtagh says he probably modelled himself somewhat on the likes of Steve Cauthen and Walter Swinburn. “I’d watch a video and study their styles and somewhere between the two growing up that’s where I wanted to be.”

Johnny Murtagh is reluctant to nominate a favourite or stand out horse from all those he rode.  “The horses I rode were brilliant horses but Sinndar won the Derby, my first Epsom Derby, and he came back and won at the Curragh and he won the Prix de l’Arc de Triomphe as well so he’s a stand out horse but I can’t leave out the likes of Ridgewood Pearl, High Chaparral and of course Yeats. I rode European Champions; World Champions and they were all top horses in their own right.”

Despite all the winners abroad Johnny Murtagh always enjoyed coming home to win his own Derby. “The Irish Derby is just up the road as I’m right beside the Curragh. I used to run the track four or five days a week so I knew it well so it was always nice to come home.  That feeling on the day when Alamshar beat Dalakhani it felt like a home victory. Everyone in the crowd was willing him home and the reception he got afterwards was really, really special. It was one of those great days that sometimes after a race you don’t take it all in but as we walked down past the packed Stands there was a great reception. It was a home town horse, an Irish horse against the French and we love that.”

Part 2 of the Johnny Murtagh interview will be posted on Thursday.