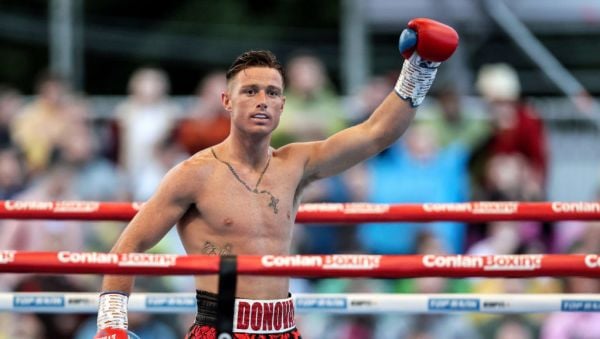 At Gort District Court on Thursday, Mr Donovan (23), of Clancy Park, Ennis, pleaded guilty to a speeding offence after he was detected driving 162km/h in a 120km/h speed zone on October 6th last year at Cullenagh More on the M18 linking Limerick to Galway.

Currently being trained by former WBO middleweight world champion Andy Lee, Mr Donovan accepted in court that he was driving in excess of the 120km/h speed limit and told Judge Mary Larkin that he was on his way to give a talk at a suicide prevention event in Co Mayo.

In court, Mr Donovan said: “I didn’t realise I was doing that speed otherwise I would not have been doing the speed. I have always respected the law.”

Mr Donovan said that he is in training camp “right now”. Solicitor for Mr Donovan, Colman Sherry said Judge Larkin would have read about his client in the sports sections of newspapers.

Judge Larkin told Mr Donovan: “You have impressed me so much with your extracurricular activities, I am not going to disqualify you.”

Judge Larkin asked has Mr Donovan any previous convictions and Mr Donovan replied: “I have never been in trouble with the law before.”

Mr Sherry asked Judge Larkin could she consider an alternative to a speeding conviction such as the Court Discretionary Fund (Poor Box).

After hearing that Mr Donovan has no previous convictions, Judge Larkin said that she would strike out the case if Mr Donovan paid out €200 to the CDF.

Mr Donovan paid over the €200 and Judge Larkin told him: “Good luck with your career.”

Renowned boxing promoter Bob Arum has described Mr Donovan as ‘the best-looking fighter since Muhammad Ali’, while Andy Lee has stated that Mr Donovan “is the most talented fighter I’ve worked with”.

Dublin Airport: 27% of flight cancellations within six hours of takeoff

Relations have never been as bad with UK government ministers: Varadkar