IN the second part of our extensive interview with Johnny Murtagh, former champion jockey and now successful trainer, from this week’s Kildare Nationalist, in your shops now, Johnny looks and his life as a trainer and reflects on the brilliant ITV Documentary, Creating Belief.

PROBABLY a surprise to everyone, apart from himself, Johnny Murtagh decided to retire in 2014. Why we wondered? 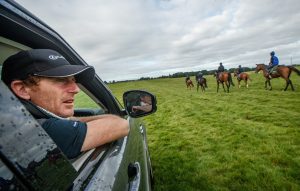 Johnny Murtagh oversees the training of his horses on The Curragh Photo: INPHO

“I was still going well. I was training and riding in 2013 but I just woke up one morning. I think I had 35 horses in my Yard and I just thought I don’t think I’ll be able to give a 100% to the riding and 100% to the training. I had a great career and I was injury free and I had my business up and running. I’d seen jockeys getting falls and people get badly hurt and when I started to think like that, and I was thinking like that, I had a great run so I just thought right, the other business is up and running and I made the decision there and then,” JP Murtagh explains.

In other words, Murtagh went out on his own terms. “I felt very comfortable and I have never regretted it since I stopped riding. I look back on my career and I didn’t leave too much behind me and I’m fit and healthy, very lucky with injuries. I had a wonderful year before I retired. I was Champion jockey in Ascot. People remember me that I was riding well at that time so I didn’t want them to be saying, Ah, he’s concentrating on the training so he has no interest in being a jockey. I went out on my own terms and I felt very good about it,” he added.

Johnny Murtagh still gets the same thrill in winning as a trainer as he did as a jockey and he didn’t have long to wait as a trainer before tasting success when Creative Belief won for him in Ascot last year. “I used to love Ascot as a jockey and I always said, when I started training, that I’d love to go back and have a winner there as a trainer so it happened,” he tells us. “Again, it’s just that winning feeling, the satisfaction and even more so now as a trainer because you have to do everything. You have to prepare them, you have to plan, you have to have your staff there. I feel like it’s our team now. Before I felt like a bit of an individual now I have a team and I love the team aspect of everything. I love having my team around me, my family around me and they were all there for that victory which was really, really special.”

The Curragh based trainer had further serious success in 2021 when Sonnyboyliston won the Irish St Ledger. “He came along though the ranks and he won the Ebor in York and then he came back for the Irish St Ledger in The Curragh. It’s a Classic and there are only five Classics every year so to win one of them was special at The Curragh Racecourse with the new stand and a few more people back. We had a great day that day.”

Johnny Murtagh was delighted too for his young jockey, Ben Coen, who is only 20. “It elevated Ben up to the next level and that’s what it’s all about.  Again, the team around you, your own jockey winning on the big stage, it’s a classic at The Curragh and they’re very, very important.”

Murtagh sees a lot of himself in Coen. “He’s very determined, he’s much more mature than I was at 20, though.  He’s getting better each week.  Last year he was good but this year he’s even better. He’s riding in those big races now and I’ve ridden in them so I can kinda tell him what my experience was. He’s very switched on to it and he wants to be the best and he’s very strong and he has no weaknesses, he just needs to tune them in and fine tune them but he is only 20.”

The role as trainer is very different for Johnny Murtagh being now first up and last to bed. “I love it: its early mornings. I’m up at 6am and we start work at 7.30pm and I feed them at 9.30pm at night.  I used to get on horses make them go as fast as they could but when you’re around them all the time they’re wonderful animals.  The signs are there and you pick up on them and you have to be there to see them. A subtle change here or a subtle change there in a horse’s temperament or personality can make a huge difference,” the trainer tells us. “I love being part of it and I love that my family is involved. I can say that now as it’s going so well but you get out of it what you put into it and I know we put a lot into it.”

Johnny Murtagh won a lot of praise for an ITV documentary, Creating Belief, which aired last year and which not only looked at his career but the personal challenges he faced in his life. Was it difficult to watch we asked? “No its wasn’t difficult because that’s was my story and without that story I wouldn’t be where I am today,” came the quick reply. “My past is my past. It was something I wanted to do and it was something I thought might help people. It took three years to make and I enjoyed every minute of it. I was sitting there watching it with the family and I was watching their reaction more than my own reaction. There are a lot of people who have to go through a lot of stuff and you don’t hear about it as they keep it to themselves so maybe it might open them up a little bit and open their minds up a little bit.”

Although Ascot was on his mind as we spoke and although he didn’t expect to have anything in the Derby Johnny Murtagh was still looking forward to the Dubai Duty Free Irish Derby. “Guineas week was very good to us, we had three winners. We will be concentrating on some of our best horses in the other races on Derby weekend. These big days and big weekends in Ireland are very important to us. We’re there and we’re taking part and we’re competing with all the other great trainers in Ireland. The Curragh is up the road from us and it’s very important to get on the scoreboard over Derby weekend,” he says enthusiastically.

What might he be looking forward to we wondered? “I’m hoping I can get a winner or two over the weekend,” was the quick retort. “The Derby should be a really good race this year with Michael Stoute bringing his horses over and I’m sure Aiden (O’Brien) will have shuffled the pack and have a couple of fancied runners. I love to see some of those really top horses from Ireland, England, France rocking up at The Curragh and having a good set to and the Champion of Europe will come out on top.”

Johnny’s wife, Orla is Chair of the Kildare Derby Festival and like everybody else he is encouraging all the local community to sample the many and varied activities organised as part of the festival. The Curragh needs to be a place that the locals are proud of and are proud to bring their families there because it is a fabulous facility.  They should feel it’s theirs. The Derby Festival make huge strides to make it bigger and better every year.”

While Johnny may take all the limelight from a racing point of view his daughter, Lauren, was a member of the Kildare LGFA team which won the Leinster Intermediate Championship recently and another daughter, Grace, is a member of the Kildare LGFA Minor team which will play in the Minor A Final on 7 July and her twin brother, Tom, is with the Leinster U18’ for the summer. “It gives us a bit of a break from the horses,” Johnny laughs.