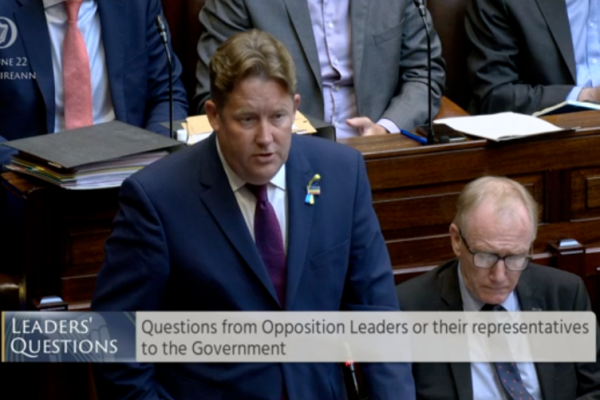 Independent TD Mattie McGrath has criticised the response of the Minister for Housing Darragh O’Brien to questions from Independent TD Carol Nolan in the Dáil on Wednesday about services for refugees arriving in Ireland.

Mr McGrath told RTÉ radio’s Today with Claire Byrne show that he took issue with Mr O’Brien because of the “tone and tenor” of his comments, his “condescending” manner and “finger wagging” to the “earnest question” from Ms Nolan.

The Minister’s response had been an attempt to “demonise” Ms Nolan and to portray her as being “bordering on racist” when “nothing could be further from the truth,” Mr McGrath claimed.

Mr McGrath acknowledged that the Irish public had been very generous and welcoming in their response to people fleeing the war in Ukraine, “but does that mean if your neighbour comes and helps that you give him the keys of the house?

“Do you give him the keys of the house, give him our car and give him our bank card – people are doing this, but the Government have no plan.

“Just tell everyone we have open borders here, we’re like a magnet attracting people from everywhere and then the systems can’t function – social welfare, health, all the different systems, speech and language therapy people on lists for four years you name it, we’re already in a mess, I want to see the people being properly looked after, a proper welcome with proper services, not hand it over to too many, and then we’re not able to deal with them.”

When asked if he wanted to see limits on the numbers of refugees, Mr McGrath said yes, he did. Ireland should “cut our cloth according to measure as we would have to do with a household – we can’t just have open borders and the Taoiseach running over to Europe being a good boy every time – cheerleading to cut off Russian gas. Cheerleading that we have open borders.

“Other countries have learned the lessons here, and we’re just blindly running down a cul-de-sac, and we’re going to be in huge trouble”.

Mr McGrath said that Ireland should look after the people fleeing war – properly. “Not sleeping on floors as we’ve seen with migrants from other countries and hoteliers being paid a fortune – it’s a ham-fisted, dysfunctional system .

“Pious platitudes won’t put food on the table and won’t look after our newcomers as I like to call them.”