SUSIE Sapphire won the Boylesports Irish Greyhound Derby for her Co Kildare owner Peter Comerford on 18 September 2021 and this Saturday night, the 25 June 2022 Peter’s brother, Aidan, will look to keep the Derby winning habit in the family as his greyhound, Kildare, takes part in The Star Sports & TRC English Greyhound Derby Final at Towcester. 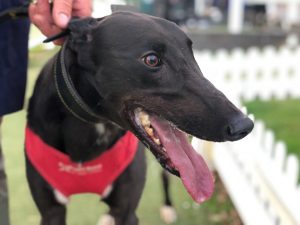 It was evident early on in Kildare’s career that he was thought very highly of when his first career start was in the first round of the valuable Con and Annie Kirby Memorial in Limerick. He was supported at huge odds ante post for that competition where he would go on to make the final and take third place. It was some effort from a dog so young with so little experience.

England was next on the agenda for Kildare, he had a solo trial around Towcester on the 1 May in preparation for a tilt at the English Derby and it’s fair to say everything has gone according to plan since then. He was beaten just a neck in the first round but showed everybody that he was a force to be reckoned with in the competition when putting in a sensational display to take his second round heat in a very fast time of 29.11.

It’s an amazing achievement for a dog so young and inexperienced to be in this position and whatever happens at the weekend he’s a dog with a massive future. He’s been brilliantly handled by his Co Waterford trainer Peter Cronin, and we wish him and the man who named him so well, his owner Aidan Comerford, the very best of luck for Saturday night. Let’s hope Kildare can capture that £175,000 cheque and trophy and be crowned the English Derby Champion for 2022.

The race gets underway at 9.15pm on Saturday night.