Following on from their great victory over Wexford two weeks ago the Kildare team to face Meath in Round 4 of the Glen Dimplex Intermediate All Ireland Championship shows just one enforced change from that game. 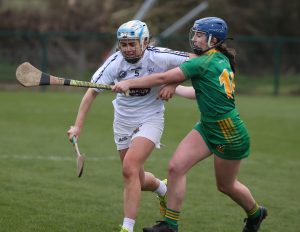 Midfielder Kelly Perkins, who had to leave the field injured two weeks ago, is replaced by Shauna Mulligan who will now partner Dearbhile Byrne in that vital part of the pitch for Kildare.

Manager Joe Quaid was extremely pleased that  work done on the training ground paid off the last day and that the players started to believe in their own ability in a game that saw Leah score 0-10 of Kildare’s 0-14 on the day.

“The Wexford match was a crossroads, its was probably our most important match of the year,” Joe Quaid said of their victory two weeks ago. “They (the players) were outstanding and it was a joy to watch all their hard work being rewarded.”

Kildare met Meath in the Leinster Final earlier this year and after an outstanding display they were just pipped at the death by the Royals. Since then Meath have lost to Derry and Wexford so Kildare will be all out to build on the performance of two weeks ago and in the Leinster Final to claim another victory in the All Ireland Championship.