THE gates finally fully opened to Irish racegoers and spectators for the first time at the Curragh Racecourse since 2019 as the famous Kildare venue welcomed racing fans and enthusiasts as well as fashionistas on what was a bright and breezy summers Saturday afternoon at Racing HQ where the feature €1m Dubai Duty Free Irish Derby was the big race of the day. 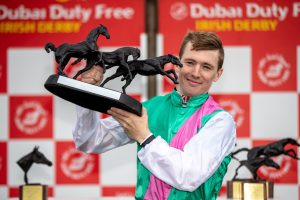 Racegoers and revellers cheered on the winners with participation through the weekend from five continents and at least 15 different countries making it one of the most global sporting events in the country.

The excitement for the big race of Saturday, the Dubai Duty Free Irish Derby, was particularly exciting with punters hoping to see the first filly, the Aidan O’Brien trained Tuesday, win the big race which is typically for the male of the species and be the first female to win it since 1994.

However it wasn’t to be Tuesday’s day as the UK raider Westover trained by Ralph Beckett and ridden by Irish champion jockey Colin Keane swooped in to snatch the 2022 Irish Derby crown at 11/8 j/f.

There was success to for Curragh based trainers on the day with Johnny Murtagh and Ben Coen combining to win the Gain Railway Stakes at 9/1 while Willie McCreery’s, Bay of Bengal, ridden by Billy Lee, won the final race, The Dubai Duty Free Handicap.

The competition off course was equally as competitive as arguably the biggest summer style prize of the year was up for grabs as the Dubai Duty Free Most Stylish Lady competition in association with the K-Club also took place which was judged by the broadcaster and impressionist Doireann Garrihy and Olympian and broadcaster Greg O’Shea.

Organisers of the big fashion event challenged racegoers to participate on a ‘Lets Go Big’ theme this year and they certainly didn’t disappoint as the racecourse exploded with colour behind the stands. The huge prize was eventually won by Olive Foley from Killaloe, widow of late legendary Irish rugby player and Munster rugby manager Anthony Foley.

Olive took the title with her colourful Amelia Wixted dress and Joanne Skelly hat and she walked away with an amazing holiday of a lifetime at home and abroad courtesy of Dubai Duty Free and The K Club winning return flights for two to Dubai with five glorious nights in Dubai Duty Free’s own five-star hotel, The Jumeirah Creekside, as well as €1,000 in spending money at the award-winning airport retailer.

Back on home soil, the winner and a guest will also be treated to a two-night stay in a luxurious Liffey Suite at The K Club with dinner, spa treatments plus transfers to Dublin Airport for the big Dubai trip.

There was also as fabulous prize for Most Stylish Man which was won by former Irish light heavyweight boxing champion Harry Cowap with his handmade light blue summer suit which won him a fantastic five-star K Club VIP experience including two nights in a luxury suite, dinner and a long list of fabulous resort activities including segway tours, spa treatments, whiskey tasting, clay-pigeon shooting and a €500 voucher to spend at nearby Kildare Village.

CEO of The Curragh Racecourse Brian Kavanagh said “We’re delighted with the afternoon, it was a big day for the Curragh, it was a big day for Irish racing, a big day for Irish sport and it was just wonderful to have owners and a fully open venue who really enjoyed themselves. We had some unbelievably thrilling world class racing with tight finishes which really had the crowd on the edge of their seats and we were so happy to see everybody young and old enjoying themselves with he equine action, the style stakes, music and entertainment on course.”

Paul Heery, General Manager of The K Club said “From start to finish, today has been such an incredible combination of world-class racing, high stakes fashion and brilliant Irish hospitality and entertainment. Everyone attending definitely got our ‘let’s go big’ memo and the crowd was full of fun, glamour and style – just what we love at The K Club. I definitely didn’t envy the huge task our judges Doireann and Greg had in helping to crown this year’s Dubai Duty Free Most Stylish in association with The K Club. They definitely selected the best and we look forward to treating them to a wonderful five-star K Club experience very soon.”